#Blogtour #Review - We Begin at the End by Chris Whitaker 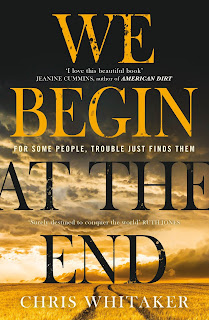 I'm grateful to the publisher for an advance e-copy of We Begin at the End to consider for review and to Tracy Fenton at Compulsive Readers for inviting me to tale part in the book's blog tour.

Nothing good will come of any of this...

I have just finished We Begin at the End and it was INTENSE. Twenty four hours (I had to eat and sleep) of manic reading, head down, ignoring the family, dogs and the weird slow-motion apocalypse outside, fixated on a tragedy set among ordinary people in small American towns some 20 years ago.

Punctuated by moments when it became SO intense I had to look away. It really is that compulsive.

You will believe these characters are real.

You will care what happens to them.

You will hurt when they hurt

You will want a good ending for them - a good beginning? - although that seems harder and harder to imagine.

We begin, not at the end, but before the beginning, in 1975. The inhabitants of Cape Haven, a small town somewhere on the coast of California, are searching for a missing girl, Sissy Radley. It's Walk who finds her, setting in motion a tragedy that will play out over decades. In that prologue we see the four friends - Walk, his best friend Vincent King, Martha May, daughter of the Episcopal priest and Star, the missing girl's sister - whose lives will be changed forever.

Jump forward to 2005 when Vincent is released from jail, after doing time for Sissy's death, and more besides. Walk is Chief of Police in Cape Haven and has spent all of those 30 years struggling against change, whether it's the loss of those teenage bonds between the four, encroaching development as the Cape is carved up for second homes, or, latterly, change in himself as he faces a debilitating illness.

Star's struggling to bring up her two kids, Duchess, who at 13 is pretty much full time carer for six year old Robin. While Star hangs out in bars and, periodically, overdoses, Duchess sees that Robin gets his water bottle filled, packs his books for school and remembers birthdays.

It's a heartbreaking glimpse of truncated childhood and a theme that recurs throughout the book as Duchess and Robin suffer one rebuff after another, losing one carer after another, sliding down the care system, subject to cruel judgements from both adults and their peers, only having each other. Robin is desperate for a home, Duchess hangs everything on protecting him, declaring herself an outlaw, reacting with spiky anger to anyone who tries to gets to close - because after all, they'll let her down in the end, won't they?

Each time you hope things might run around for the kids, something awful - but seemingly inevitable - seems to happen. It's a testament to Whitaker's writing and to the powerfully drawn characters he births onto the page that you still want to keep reading. You just have to know what will happen next - what defiance Duchess will roar, who she'll swear at, what revenge she'll take - even as you fear for her.

There seems to be a tornado of destruction eating up the lives of the Radley kids. Walk tries to look out for them - whether out of genuine feeling, because of those bonds with their mother, or as part of his generalised and futile attempts to hold up any change, isn't clear. I'm not sure he knows himself. The same motives presumably underlie his interventions on Vincent King's behalf, which take Walk further and further from the strait and narrow road that he, as Chief of Police, should be treading. There's a local gangster, Dickie Darke, who casts a menacing shadow and Walk seems determined to bring him down but as the story shows, even gangsters can have good - or at least pure - reasons for what they do.

At one level this is a crime story - there is an unsolved murder, a man on trial, further killings. Chief Walk fulfils our need to have someone trying to "solve" the mystery and there is enough evidence forensics, testimony, Walk's knowledge of those concerned - to keep the mind engaged.

But really, this is a book you will read with your heart, not your mind. Amidst the trim little American towns with their smart holiday homes or we-ordered farms and, hidden away, the less well maintained residences of the poorer folk, we see a tragedy of operatic proportions play out. There is a very conscious sense of being in a story - supported by Duchess's references to herself as 'the outlaw Duchess Day Radley', by her allusions to the survivors and victims of shoot-outs, escapes and chases, to epic robberies and rescues, to people who 'were turned pages in the darkest chapters of her life. She knew that they would appear agin, the twists, the sting in her tale.' Meeting Duchess at a gas station, the woman behind the counter 'knew the crossroads the girl lived at'.

At the same time, Whitaker counterpoints this sense of melodrama by writing about very ordinary, very recognisable people and places and using such vivid and at times beautiful language that the story seems to stop and hang onto it - whether observing that 'Smoked glass made matt of the world', that 'Thunderheads formed like gathered mistakes' or that an old man 'stooped like he was carrying each of his years on his back'. Again, it is a book that you feel as much as read - deeply poetic and appreciative of those moments of beauty that can come unexpectedly if you watch for them.

But that, for me, only heightens the pain as things get worse and worse - for Vincent, for Walk, for Duchess and Robin - as things are broken that can never be fixed, as changes come. I challenge anyone to read this book without shedding tears, at least inwardly: the degree of loss and betrayed, eroded innocence is so great.

At the same time it's a compelling, not to be missed, read.

You can buy We Begin at the End from your local bookshop (or you may be able to, some are still managing to operate in the present circumstances and I'd urge you to try because they really need your support and we need them to be there for us). You can order it online from Hive Books, from Blackwell's (who I've noticed often have books available when other outlets don't), from Foyles, WH Smith, Waterstones or Amazon.

For more information about We Begin at the End see the publisher's website here.

The tour continues with many great reviews to come as you can see from the poster below - do check them out! 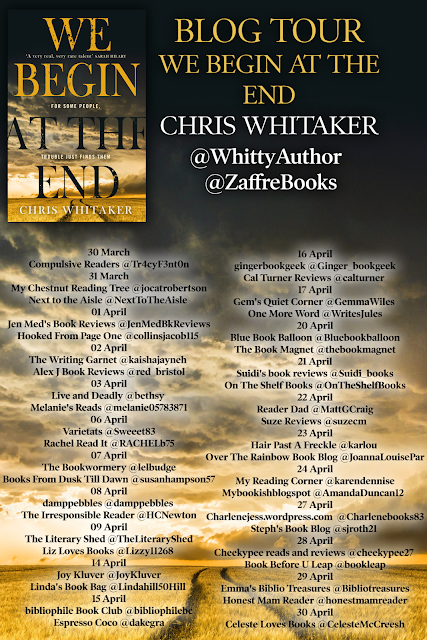