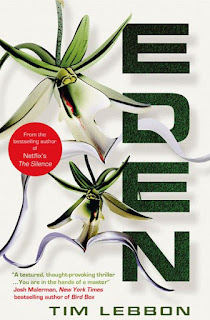 I'm grateful to Titan for a free advance copy of Eden to consider for review.

Tim Lebbon's new eco-horror-thriller sees a group of dilettante adventurers seeking to cross one of the last wildernesses on Earth and finding themselves out of their depth.

Eden is one of the areas known as Zones - regions of the world that have been deliberately abandoned to Nature, and are zealously guarded by security forces to keep invasion humankind out...

...or something else in, perhaps?

There are zones distributed around the world - they are in North and South America, China, Russia, Africa, even one in Wales - but Lebbon is cagey about just where Eden is. The fauna, the climate and the ebullience of life there suggest Africa, but other internal evidence made me think perhaps Europe. Who knows. This is a world of eco-catastrophe where temperatures have risen, the oceans are polluted and species may well have drifted. Indeed part of the theme is the drift which has taken place within Eden.

The story works at two distinct levels. In the chapter headings we see an examination take place of the Zones themselves - the displacement and suffering involved in their creation, the zeal of their guardians (and the rumours of killings of those seeking to enter), speculation about their destiny and evolution, rumours about what lies inside them. It's creepily effective in creating a sense that there is something more going on there than re-wilding. Just why are the Zeds, the Zone Protection Force, so lethal? Is there just too much of a self-justification in the words of the Zone bureaucrats ('Our aim was ambitious, our intentions pure...')? A sense, perhaps, that not all is as it seems?

Perhaps. We don't get an answer to the bigger question of what's going other than through the experiences of Jenn, her father Dylan and their team. The group are dedicated adventurers, travelling the world - and the Zones - and seeking to be the first, the fastest, the most daring, at traversing them. We first see the party about to sneak into Eden and, to be honest, the introduction doesn't do them any favours. The Zones are supposed to be apart, pristine, untouched by humanity but Dylan & Co - despite their professed eco-credentials - seem set on violating that, and basically for fun. One also gets the impression that most of them don't have to worry about earning a living - as they seem to spend most of their lives adventuring.

If anything, one gradually loses sympathy as it becomes clear that there are secrets, hidden motivations and conflicted loyalties in the team, cloaking objectives that are, if anything, even more dodgy. You might expect this would mean the reader doesn't care when things start to go wrong, but nothing could be further from the truth. Lebbon is very, very good in this book at drawing out that period when things seem a little off, when our group begin to feel concerned but don't take enough care, don't quite respond fast enough. And he's even better at exploding that into full scale catstrophe and desperate attempts at survival. I promise, it doesn't matter at all by then that you might not have liked some of these characters - you'll know them well enough to care what happens (and you'll want them to survive long enough that the mystery of what's going on here will become plain).

Behind the action-filled final third of this book is an intriguing premise, which hooks into something I saw Adam Roberts write about recently: the line of books, going back 200 years or so, which see humanity destroyed through catastrophe and only one, or a few, left to witness that. Roberts traced the appeal of these to the sense of freedom that being the last, or one of the few last, gives - from society's rules and from obligations to others. I think that the behaviour of Dylan, Jenn, Aaron, Selina, Cove and Gee can be understood perfectly in that context as an attempt in a crowded, dirty world to regain a freedom found in an empty world. Lebbon is, though, very clear-eyed about that world not being empty. The freedom, wonder and joy is illusory or at least bought very, very dear and Wordsworth's belief, expressed in his poem "Lines on Tintern Abbey" that "Nature never did betray the heart that loved her" is shown up as naïve at best, self-deluding and dangerous at worst.

An epic thrill ride of a horror novel, setting modern eco-sensibilities against classic adventure and coming to some very uncomfortable conclusions.

For more information about the book, including links to buy, see the Titan website here.
Email ThisBlogThis!Share to TwitterShare to FacebookShare to Pinterest
Labels: 2020, adventure, eco-fiction, horror, Tim Lebbon