Review - Coming Up For Air by Sarah Leipciger 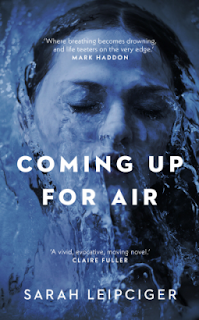 I'm grateful to the publisher and to NetGalley for a free advance e-copy of this book.

And now for something (for me) completely different.

We see a young woman - never named, she is literally referred to as L'Inconnue (the Unknown Woman) - travel to Paris and take up a post as companion to Madame Debord, a suspicious ('She may have been paranoid but she was still a Parisienne'), irascible older widow (older than L'Inconnue, that is, and by the judgement of the time, "old").

In Norway, Pieter Åkrehamn is a young child in the 1920s and later a grown man in the 40s and 50s. It becomes clear that he is narrating his life story - a story balanced between a love of the Northern seas and lakes, of swimming in the cold water until just before it begins to kill and between a constant, haunting grief.

And in Canada, Anouk grows up in the 80s, a girl with cystic fibrosis. Leipciger describes, not a tragedy bravely borne or any other cliche, but the day to day practical difficulties for her and for her parents. Again there is a fascination with the outdoors, with swimming now in the rivers and lakes, even the polluted Lake Toronto. (The chapters focussing on Anouk interleave with those on her mother, Nora, but these two sections are much closer to each other than the rest of the book).

Each story - and they are very different - is narrated with a crystal clear eye for detail ('the hard rainfall of a piano being played mezzo-forte', 'granite like the story of the Earth'), a studied appreciation of, and empathy for, the tiny events and incidents of everyday life. L'Inconnue's takes place over the shortest period but documents her growing up - coming to Paris as a "provincial", learning how to live there ('this was my first city, and it was Paris': there that sense here of Paris as more than a place, as a civilisation) becoming increasingly confident and self-assured, discovering love ('She had a beautiful potted belly, and if a hundred cakes would have given me a belly like that I would have eaten every one of them') but - not a spoiler as this is the first scene we encounter - throwing herself into the Seine in despair. Anouk's story parallels L'Inconnue's, we see her growing up, a happy child, through medical crises, finding her feet, weathering her parents' increasing distance, but, also, coming to a crisis point where her condition requires a lung transplant.

Bridging the two, Pieter's story spans the longest period and forms a critical bridge in the book though it also forms the shortest part of the book. Pieter's account is wrapped round a loss and is perhaps the most intense of the three, telling of a grief, almost while not addressing it. It was incredibly moving.

Three different stories yet they have some common themes. Both Pieter's and Anouk's stories touch on men - husbands, fathers - who seen self reliant and in control but who at critical moments are actually absent or absent-while-present: they don't know what to do, they freeze. It's Anouk's mother who deal with the dead deer, it's Pieter's wife who saves the house from fire (and who copes with the difficult child when he can't). These are significant moment but Leipciger doesn't make them simplistic turning points in the narrative or in relationships.

Similarly, the idea of water, of immersion, runs through all three narratives. For Anouk it's both a balm, helping her live with her condition and - if the warning signs are not heeded - a danger. The margin is slight, as we see also with Pieter when he swims out too far. And L'Inconnue too develops a fascination for the Seine before that final plunge.

And, of course, there is death. Actual deaths, as the loved are borne away, sometimes overtly marked - a joyous funeral in Canada - sometimes not, as when unclaimed corposes are exhibited in the Paris Morgue, visited by L'Inconnue and her lover - sometimes simply passed over, as with a boy who dies unseen. Deaths garnished with rumour and fancy. Deaths that afford life to others, as transplant donors or the inspiration for life saving innovations. Potential deaths, close escapes: the book explores that margin, that grey area, discussing the idea of resuscitation, the limited time when death can be averted, undone.

There's an idea behind this, I think, the symmetry of life and death - life as a brief interruption to death, rather than the other way round: 'Where we are, I think it's like a river and you're the flow. And every so often, out of the flow, you, me - all of us - we crawl up on to the bank and we do life... River is life and death both'.

At a time of uncertainty and indeed death, it's actually a rather uplifting thought to take from this very beautiful, absorbing book. I would strongly recommend.

For more information about Coming up for Air, including links to places where it can be bought, see the publisher's website here.