Review - The Age of Witches by Louisa Morgan 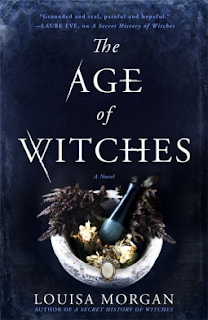 I'm grateful to the publisher for a free advance e-copy of this book via NetGalley.

Following last year's The Witch's Kind (a book I loved) Morgan has gone back a few decades to the Gilded Age 1890s while still using her "actually existing witches" to shed light on customs and manners and, especially, on the position of women in society.

Annis Allington is a seventeen year old woman living a comfortable life in New York. As daughter of a wealthy manufacturer (her father owns a business making iron stoves) she can have pretty much whatever she wants - except for parental love.

Annis's mother died when she was a baby; her father is withdrawn and money-obsessed. Stepmother Frances is there, but has her own plans for social advancement and only pays attention to Annis as far as those plans require it. The nearest thing Annis has to a mother is Mrs King, the cook - and the love of her life is her horse Black Satin ("Bits") who, in defiance of convention, she insists on riding astride rather than sidesaddle.

We also meet Harriet, Frances' distant cousin (Annis is also a several-times-removed relative). Both Harriet and Frances are witches, descendants of Bridget Byshop, hanged in Salem as a witch two hundred years before. Harriet has followed a path of enabling, collaborative and healing craft, Frances the maleficia, magic used to control and even harm. As Frances begins to see a way to raise the family to the ranks of the Four Hundred, New York's glittering social elite, by snagging an English aristocrat for Annis to marry, the two women's different forms of practice come into opposition...

I really enjoyed this book. Morgan has an easy way of writing - about life, relationships, magic - that carries the reader along so that the other-worldly aspects of her story don't stand out, they just seem obvious. There are matter of fact descriptions of bits of magic, of "knowing" things, of the effects of various workings on their practitioners, which seem just as much in place as Annis grooming her horses or her maid Velma fixing her hair. While there's an opposition between (broadly) good and bad uses for magic, these aren't stand-ins for cosmic good and evil. This isn't the sort of book where the characters are cyphers for contending powers, rather they're simply people, albeit rather unusual ones. Yes there can be consequences to what one does - but that's just life.

Indeed the essence of this story is more a matter of romance - if you called it "Pride and Prejudice and Witches" you wouldn't be going too far wrong, especially in the sense that a major tension is between the aloof English aristocrat whose family seat is crumbling away and bleeding cash, and the (to him) brash American heiress who has the money to fix that but would rather pursue horse-breeding. Not an unfamiliar story or setting but Morgan does it very well, pointing up the powerlessness of Annis as a young woman in what Frances assures her is a man's world, the contempt heaped on her for not following the normal rules of society - and the privilege of great wealth that allows her, all the same, to get away with that.

Being a witch may help one soften the edges of a rigid and patriarchal society, but it also has its dangers since it means being a woman who stands out. Both Frances and Harriet deal with this in their different ways and while that animates conflict in the novel (and leaves Annis having to make hard choices about her path in life) Morgan is careful not to judge anyone's motivations. Frances has had a hard life - she also lost her mother young and grew up poor. Her desire to climb in society arises from being the outsider, and ultimately it's this warped structure of social inequality that is to blame for much of what goes wrong. Annis has, as I've said, the advantage of money and is a sympathetic character but tellingly, we learn that she's never visited the servants' quarters in her own house and that when she does, she is surprised how cramped and cold they are.

The central characters - Annis, Frances, Harriet and James, who we meet in England - are believable, relatable (even wicked stepmother Frances, or perhaps, especially Frances) and all have a degree of moral ambiguity to them - even Harriet isn't quite as pure as she'd have us believe. Indeed, I'd say this is the most perceptive and realistic side of the book. Morgan is very accurately depicting people as they might really be, if able to wield the kinds of magic that exist here and with no oversight or constraint (there's no cosy "Council" of witches to keep everyone in line).

All in all, a fun blend of fantasy, romance and shrewd social observation. The latter is perhaps a degree less nuanced than it was in The Witch's Kind but the book shares with its predecessor a focus on capable, forthright women who are nevertheless constrained by the warped patriarchal society around them.

I think I see Morgan setting things up for a possible sequel and I look forward to that.

For more information about the book, including links to buy, see the publisher's website here.