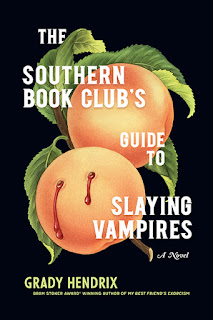 I'm grateful to the publisher for an advance copy of The Southern Book Club's Guide to Slaying Vampires to consider for review.

This book is, as Hendrix notes, a follow-up, not a sequel, to My Best Friend's Exorcism (which should be enough for you to snap it up) with the same setting.

Here, the focus is on the adults, specifically the mothers, who keep everything moving for their kids and their husbands. A few of them - Patricia, Grace, Kitty, Maryellen and Slick - have formed a book club, alternating fiction with True Crime - which generally tells how serial killers come into polite, safe neighbourhoods like theirs and remain undetected. It's a release for Patricia, a former nurse, who married Carter, an ambitious but absent doctor. She loves her children, Korey and Blue, but is feeling squeezed out of her life and deserving of a little excitement... be careful what you wish for, Patricia!

Something will, obviously, come to this particular peaceful, safe neighbourhood. Hendrix's title promises nothing less. We're primed to expect bloodsucking creates, slaughter, and peril. And the book doesn't disappoint. But Hendrix gives us so much more.

I realised when I read this book that I'm accustomed, at some level, for the vampire vs vampire-hunter struggle to be a clash of the privileged - the aristocratic Count against the Professor, the Doctor, the Priest (all male of course). When Van Helsing sets out on the trail, nobody tells him that he's hysterical or "needs help".

In The Southern Book Club's Guide... everything is bound up with privilege and patriarchy. The comfortably off, white, women of the Book Club are nonetheless bound to their husbands. They're not considered to need their own bank accounts. Hubby's views always come first and if a wife steps out of line, why, there's a little pill for that. Or a swinging fist.

At one level, reviewing this book, I feel it ought to have a couple of content warnings for domestic violence, coercive control and even rape. Yes, there's also more conventional gore and some creepy scenes with rats, but in a sense the real horror of this book is how the intruding, monstrous power makes itself at home in this nest of male privilege, finding allies and protectors, so that when Patricia and co try to take action - to protect their children, and others' children - they are firmly, cruelly brought back into line. This is vampire fiction which is not just a vendetta between monster and avenging hunter, it is deeply, richly social, showing how established order, prejudice, and power structures let the monsters loose among us.

Hendrix takes things further. The victims in this book are, for the most part, not the privileged white kids of the Old Village but the inhabitants of Six Mile - the district where the people of colour live, a place the fine ladies of the book club are nervous to visit. The police don't look too closely when children from there go missing and end up dead. And this isn't some aberration - in a bit of backstory (the story, in fact, behind that creepy cover image) we find out that what's going on here is part of a pattern.

So, in this book, there is a satisfying degree of moral murk. A lot of handwringing, a lot of looking the other way, of letting the bad things happen somewhere else, to someone else. There is actually a great deal of moral horror here, and it is more frightening, more disturbing and sticks around longer than the scenes with blood, combat and injury.

This is horror told in depth and detail, well grounded in a particular time and place (and Hendrix emphasises that by letting the story develop over years). The ladies of the Southern Book Club are redoubtable, and the story celebrates their courage and the friendship they find under pressure. But they are not invulnerable, and some wounds don't heal.