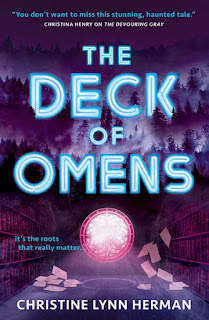 Today I'm joining the blogtour for The Deck of Omens by Christine Lynn Herman with an exclusive extract, and a giveaway.

I have a spare copy of the book and to be in with a chance to win, just share this post and tag me in on Twitter @bluebookballoon and @ me with the answer to the following question:

What is Harper afraid she can't stop?

Now all that's done... the extract!

From The Deck of Omens by Christine Lynn Herman

Harper’s hand brushed the edge of the neglected fern sitting beside the table. She took a deep breath and pushed. She had not gone to the Hawthorne house the night she got her powers back with the conscious thought of destroying their tree. But when she saw the hawthorn’s great branches spreading behind the roof, waving in the wind, she had felt the cumulative rage about everything that had been done to her—her father’s hands closing around her neck, the Church of the Four Deities in their dark brown robes, Justin staring at her, a sword pressed against his neck, and, of course, the night that had just come back to her. The night Augusta Hawthorne had taken her powers away before she’d ever gotten the chance to use them.

There was so much to sort through. So much to feel. Harper understood now why Justin Hawthorne had behaved strangely toward her these past few weeks— because his mother wasn’t the reason she’d lost everything.

He’d betrayed her the night of her ritual. Sold her out to his mother before she could have the chance to use her newfound powers.

Pushed her into the lake, which had led to the accident that had cost her a hand—and led her straight into the Gray.

Harper had lost sight of herself in that moment, dizzy with longing for everything Justin and his family had taken from her. She’d reached forward, her palm pressing tightly against the trunk, and pushed her anger into it. And when she pulled back and realized that the hawthorn had gone deathly still, she hadn’t wanted to reverse it.

This time, the change was smaller, almost gentle. The leaves froze in place, their color fading to red-brown and spiralling down into the dirt, until there was no plant remaining, only stone. But then Harper felt something else: a push to keep going. The stone spread down the side of the fern pot, encroaching toward the floor, and Harper’s throat went dry with panic as she realized that she didn’t know if she could stop.

Violet’s hand landed on her shoulder, wrenching her focus away. Harper exhaled with sharp relief as she realized that the spread of stone had stopped. When she looked up, Mitzi and Seth were both gaping at her.

Mitzi knelt on the floor, examining the plant. When she caught Harper’s gaze, her eyes were as round and wide as two full moons. “You have powers?”

Harper’s laugh was slightly bitter, slightly manic. “Yeah.” “And you used them . . .”

“On the family that deserved some retribution,” she said. “So, yeah, I left, because I didn’t want Augusta Hawthorne to punish any of you for me. Because you deserve to make your own choices instead of being forced to go along with mine.”

“Choices?” Mitzi returned to the couch, tugged on her earring—a nervous tic.

Harper sighed. This was the part of the conversation she’d been dreading the most.

“Augusta Hawthorne took my memories of my powers away,” she said. “Do you still want to patrol for her, knowing that?”

Mitzi hesitated. “Patrolling is what keeps the town safe.”

“Does taking my powers away seem safe to you? Maybe if I’d had access to them, fewer people would have died.” “Or maybe you would’ve turned more than the hawthorn tree to stone.” Seth’s voice was the most somber Harper had ever heard it.

Her stomach churned with nausea. She’d known it would go this way—but she’d still hoped otherwise.

Don't miss the rest of the tour - see the poster below for more details and visit the Titan Books website to find out more about the book here. 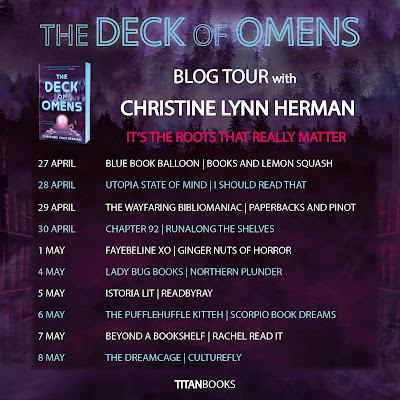