#Review - The World We Make by NK Jemisin 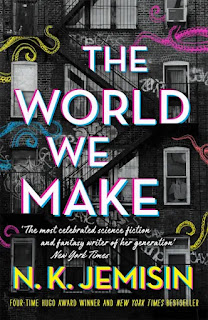 The World We Make (Great Cities, 2)
NK Jemisin
Orbit, 3 November 2022
Available as: HB, 352pp, e, audio
Source: Advance copy
ISBN(PB): 9780356512693
I'm grateful to Orbit for an advance copy of The World We Make to consider for review.
The World We Make concludes Jemisin's Great Cities sequence, the first part of which, The City We Became, was published in 2020. The author explains in the Acknowledgements why, in the end, this couldn't be a trilogy (basically, truth overtaking fiction) and why it was a tough book to write. However it is still, in my view, a brilliant accomplishment. Jemisin has - across two books - studied the essence of a confident yet wounded modern city - New York - through the lens of fantasy writing at its best. And it's fun to read too!
Jemisin's premise, if you haven't read the first book (you should!) is that "great" cities wake up. Past a certain point, they focus their essence into a human "avatar" (or in New York's case, seven of them - one for each borough and one for the whole. Yes, seven - if you want to know why not six read the first book). That has just happened for New York (there is a reason why it is so recent, which was one of my questions about The City We Became, though not something that particularly bothered me).
If that was all there is to it, we would not have far to go. But it's not. The Cities, NY especially, are under attack from a cosmic-horror style threat personified as The Woman in White and which has something of an affinity with gentrifying, authoritarian trends in the city. And, as becomes obvious here, in the wider multiverse. This threat was staved off somewhat in the previous book as the boroughs came together (mostly) but returns in The World We Made. Part of the meat of this book is the much closer detail we get about that threat and its motivations, which suggest some quite murky morality around the - what world shall I use? Ecology? - of the cities in the branching multiverse.
That murkiness is reflected as Brooklyn, Bronca, Padmini (avatar of Queens), Manny and the rest seek wider help to defend their city, and find some of the other great World Cities less than supportive. I loved the way that Jemisin transforms a potential weakness of her metaphor - that a typical city contains millions, and will have had hundreds of years of history, so its avatar is surely going to be a babble of incoherent voices and intentions - into a hymn to the creativity, the creative destruction, even, of our great cities. They aren't, we are reminded, gentle things or. Making a cameo, London blithely admits to killing people and taking their stuff. But she has changed. All is movement and change here, good movement and change, in contrast to the stasis and bland sterility beloved of The Woman and her city.
This second book is, though, not all focussed on the comic menace or on supernatural (superurban?) struggle. The avatars are ordinary people too, and Jemisin's portrayal of their bickering, of who fancies who and of the pressures on some - pressures from family, from legacies of abuse or even just from work (Padmini's lost a job and has the immigration service after her) is very well done, indeed the human detail really drives this plot rather than the city-ness and creates a level of reality that the Woman finds hard to wholly comprehend (though she seems fascinated by it, I think).
That's lots else. Brooklyn, goaded beyond endurance by the corruption and racism of the city authorities, campaigns for Mayor - giving Jemisin scope for some satirical scenes but also opening up the team to wider attack from political extremists in a subplot that very much exposes the underbelly of US politics and society. Manny calls in allies, and we learn a bit more about his history and background - also rooted in the Black American experience. And Aislyn is faced with choices she can't duck over what the Woman is doing to her beloved Staten Island.
Less hectic, perhaps, than the first book, and more considered, The World We Make still rises to a heart thumping climax. It's vividly written and has a glorious sense of place, and above all, of engagement with the complex issues and messy compromises that make a real city a place worth living in and indeed, fighting for. Jemisin's writing is gorgeously inventive, and I felt that she truly inhabits her characters.
Finally, just look at that design from Lauren Panepinto. It's not just pretty - in the right conditions, it does things. This is a book you need to hold in your hand, not just have on your e-reader...
For more information about The World We Make, see the publisher's website here.