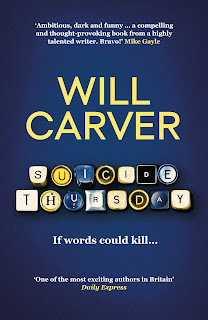 I'm grateful to Karen at Orenda Books for sending me a copy of Suicide Thursday to consider for review, and to Anne at Random Things Tours for inviting me to join the book's blogtour.
Oh this is a wickedly sharp little book. Take care how you handle it or you may end up bleeding.
In Suicide Thursday, Will Carver returns to a familiar theme of his recent books - the clue is in the title, so the reader should consider themselves fairly warned, it won't be for all. And in this book, I think the subject is handled in an even more personal and, well, creepy vein than he has yet, hard though that may be to believe if you've read Nothing Important Happened Today or The Daves Next Door.
In Suicide Thursday there's no sinister grand scheme for glory, no greater cause, to direct the action. The story is pared down, simple and stark. Three friends, Eli, Mike and Jackie.
Eli is a sort-of failed writer. He churns out first chapters, but is unable to take his books any further. Comfortably off, but not so much that can afford to leave his cubicle-bound job in marketing, he buys an abandoned bagel workshop in trendy North London and sets up his library of first chapters, available for purchase to those who can't get started. By day, he endures the tedium of office life. By night, he unloads his frustrations each night to a therapist. Who doesn't exist.
Jackie, Eli's girlfriend, is by turns haunted by Catholic guilt at her strong sex drive, which drives her to regular Confession, busy indulging that drive with Eli (mostly), and concerned for her friends Eli and Mike.
Mike is... well, Mike is unemployed and spends his life sanding and polishing the floor of his flat.
The book includes Mike's and Jackie's perspectives, and we also see some other points of view and some mysterious and unsettling text messages, but Eli is at the centre of things.
I think it would be fair to say that Eli is trying to make his life more meaningful. His chapters reflect aspects of his own life (often, very funnily). Conversely he frets and fusses over whether his actual life is following narrative logic, and whether he ought to nudge it so it does. Ought he, for example, to break up with Jackie so that a reconciliation can come in Act 3? Eli hungrily eyes up women who could facilitate that, with little success.
Jackie sees things through a different, simpler narrative lens - one involving potential wedding bells and a relaxation of her crushing guilt.
And Mike... well, Mike sands his floor.
The three weave their dance, the story moving forward and back around that Suicide Thursday, Carver never inviting the reader to judge these characters, they do enough of that for themselves, but making three flawed people sympathetic, in different ways. I love that his books, while going to dark places, frequently - as here - do so with compassion and empathy. They may judge themselves and each other  but the author isn't doing so (yes, I know, the author is writing them judging, but that's not the same, I don't think) making the navigation of this story something of a moral journey for us and in places therefore, a sort of self-condemnation. That sense is heightened because while more or less standalone, readers of Carver's other recent book will recognise in Suicide Thursday hooks, overlaps and references to the wider Carververse, suggesting that it takes place in the same world and that concerns and threats in that world (the perverse suicide cult, the baleful Beresford) are present here in the margins even if largely unseen.
As always, the writing is simple, direct and often questioning: absurdities of modern life are exposed and highlighted without being ridiculed and the author is perfectly comfortable drawing attention to the contradictions and inconsistencies of these characters, especially to their different ways of seeing the world, without telling is who is right or indeed, whether anyone is. The Carververse is painted in a rich palatte of moral grey shades and Suicide Thursday is no exception.
The book is also often very funny, indeed there are some almost slapstick situations as well as excruciatingly embarrassing ones. Mike literally varnishing himself into a corner is one, as is the trouble that Eli's wandering eye gets him into and the reaction he gets form one young woman.
All in all an excellent addition to this writer's output and I'm glad that, in contrast to Eli, he not only starts but finishes his work, giving us more to be entertained by and to think about.
For more information about Suicide Thursday, see the publisher's website here - and of course the other stops on the blogtour which you can see listed on the poster below.
You can buy Suicide Thursday from your local high street bookshop or online from Bookshop UK, Hive Books, Blackwell's, Foyle's, WH Smith, Waterstones or Amazon. 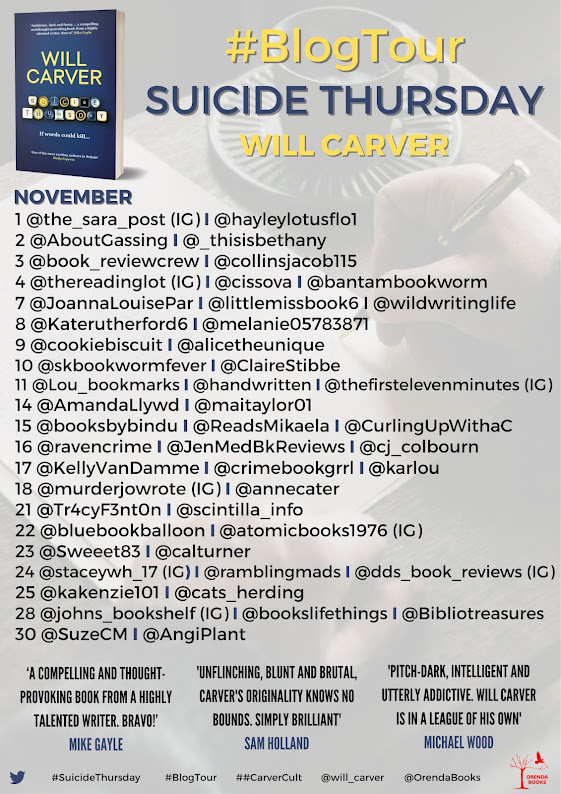