#Blogtour #Review - Blood of a Novice by Davis Ashura 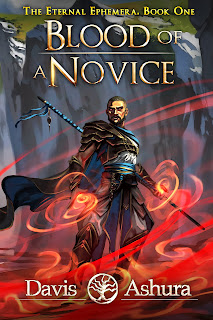 Blood of a Novice (The Eternal Ephemera, Book One)
Davis Ashura
Available 8 November
Formats: e-book, audio
Sour ce: advance e-copy
ASIN(e): B0B86KPPM1
I'm grateful to Fantasy Book Critic for inviting me to take part ion the blogtour for Blood of a Novice, and for providing an advance e-copy to consider for review.
Blood of a Novice follows the early career of Cam Folde, a young man from a disreputable family (they're the town drunks) in a remote rural community a long way from anywhere.
Through a mixture of his own enterprising nature, some good luck (and then a dollop off bad luck) he receives enhancements to his magical nature. I should explain that in Cam's world (labelled 'The Salvation') everyone has, to a greater of lesser degree, what we might think of as supernatural powers (so perhaps the world 'magic' is not really appropriate). These powers derive both from innate nature and talent and also from absorbing natural 'ephemera', intense training and study and other means - to say too much would be spoilery.
As such, the events early on are key to Cam's future, both establishing him as something of a chancer and showing how that luck he finds (or rather, the bad part) not only makes him a pariah in his community but also shapes his abilities in good and bad ways. Part of the result of this is a disability or perhaps an imbalance that will constrain his choices but also drive him to greater efforts in order to overcome it.
Cam's progress from his hometown reveals to us a wider world of good and evil, one influenced by South Asian mythology and stories. Ashura has written "As far as Blood of a Novice is concerned, this is the background of how it came to be. The philosophy and theology of the series started with a dream, which was weird. That isn't my thing. Anyway, the dream began with a question: "What is God?" That definitely isn't my thing, and I sure don't know the answer to that question. But at the time of the dream, I also didn't care. It was 2 AM, and I just wanted to go back to sleep. But sometimes when your mind is racing in the middle of the night, you can't sleep no matter what you want. This was one of those times, and in the end, I ended up imagining the theology of Blood of a Novice. Later on, I found out it was similar to the first three chapters of the Bhagavad Gita as translated by Eknath Easwaran."
Here we meet sages and divines (the story opens with a battle between two gods) and learn about the pathway to divinity - that honing of abilities and talents can take a young man or woman a long way. We see the deadly danger posed by rakshasas, human or animal-formed monsters that erupt into the world and contest with the sages and theeir novices, acolytes and other supporters for dominance.
It's a brilliantly depicted world, teeming with menace as much as with politics. As a young man from the wrong side of town, and one with a reputation for drunkenness as much as bad luck, Cam is unpopular with the young nobility who comprise the majority of the scholars at the academy which he eventually manages to join. Ashura makes this clear, but doesn't waste a great deal of time detailing how this plays out day to day - focussing instead on the big themes: Cam's (painful, slow) advancement and the eventual challenges and battles into which he's flung.
Cam comes over as a thoughtful, if anguished, natural leader of the team, to which he's assigned and to whose successes he's key. He has plenty of regrets, but doesn't dwell too much on them, and very much looks to the future. There are though clouds in that direction, with Ashura dropping hints of something, some cause or plan, working its way out behind what we see.
While Cam is the focus of the novel, we see a little from other perspectives too, for example Weld, an arrogant young man to whom Cam takes an instant dislike (and who I suspect will prove to have more to him than we're allowed to see here - at least I hope so as I'l have liked him to play more of a part than he does) and one or two others besides. Weld is one of half a dozen or so Novices grouped with Cam in "Light Squad", who, with Cam's teachers, are the central characters of the story. Among the teachers my favourite characters was Sarai, a woman of some mystery with whom Cam had a previous encounter with which made something of an impression. Her exact history, status and intentions are though teasingly obscure, making her one of the most interesting figures here.
In all, Blood of a Novice is an extremely readable fantasy, using Cam's (in particular) attempts to progress in skill and power to illustrate the mythic and ethical basis for its world, as well as the dangers that world faces. There's plenty of action, and the magical basis of existence and life is taken for granted  providing skills and talents that can be exploited in different degree by everyone from the humblest fieldhand to the most powerful Sage. With some threatened disturbances to the even tenor of Cam's life looming by the end of the book it will be interesting to see how that plays out in succeeding volumes.
For more information about Blood of a Novice, see the other reviews on the tour already published or coming soon - Out of this World SFF, Fantasy Book Critic, Before We Go blog, Lena at Goodreads, Pages & Procrastination and FanFiAddict.
You can buy Blood of a Novice from Amazon here.
Email ThisBlogThis!Share to TwitterShare to FacebookShare to Pinterest
Labels: 2022, blogtour, Fantasy, magic