#Review - What Moves the Dead by T Kingfisher 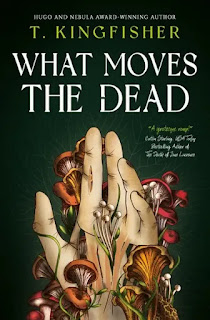 I'm grateful to the publisher for an advance copy of What Moves the Dead to consider for review.

What Moves the Dead takes us to Ruravia, a remote Central European country sometime in the 1890s. Alex Easton, a former soldier, has come to visit childhood friends Madeline and Roderick, with whom all is not well...

I completely loved this bizarre, fungus-steeped Gothic episode which echoes and completes Edgar Allan Poe's The Fall of the House of Usher, supplying an explanation and a great deal of background to that sinister story. Madeline and Roderick are the Ushers, and are central to this story, but while Kingfisher gives a plausible scenario explaining what is going on, this book is so much more than that.

Easton is, for example, a fascinating personality, Gallacian by nationality, a nation whose language has seven different sets of pronouns 'one of which is used only for God' and another which specifically applies to soldiers - creating a reality which the slightly buttoned up Dr Denton, an American also visiting the Ushers, has some trouble with. Easton is also a sufferer from tinnitus, and dwells in this story on the aftereffects of war on those soldiers who are lucky enough - or unlucky enough - to survive. Easton and Denton bond, somewhat, over the aftermath and pity of war: both have served. (Kingfisher surfaces something often, I think, hovering on the margins of Victorian fiction - think of Doctor Watson and his wounds from Afghanistan, for example).

With this small cast of characters (there are a couple more) Kingfisher has immense fun. The book is both deeply, scarily chilling and - often at the same time - very funny. It's also firmly rooted in a well-realised world, only partly based on evocations of the classics (as well as Poe, there are echoes of Conan Doyle and of course, Anthony Hope).

All the familiar tropes are here - the isolated house, the mysterious wasting disease, the sense that something is being hidden, sleepwalking, the rational yet baffled outsider - yet the story has a heart and should bond those trappings and, when is all is finally revealed, a rather plausible if chilling explanation. It's quite different from those other horror - Kingfisher evokes an eerie reality closely tuned to the rhythms and growth of the natural world and indeed from the start there's both a fascination with that (conveyed especially though the eccentric wandering English naturalist Eugenia) and a sense of threat.

All in all, an entertaining and thought-provoking story, one I galloped through in a single day (even though I had another book on hand that I ought to have been finishing).

For more information about What Moves the Dead, see the publisher's website here.