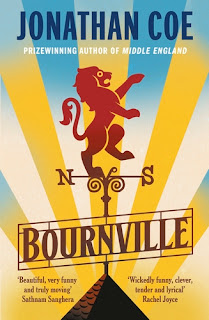 Coe's latest novel takes us on a trip though the past 75 years of British (well, English) life, using as stepping stones seven significant episodes from with VE Day in 1945 to its 75th anniversary just as the Covid-19 storm was gathering. En route we see the Coronation, the 1966 World Cup, the Investiture of Charles as Prince of Wales, his and Princess Diana's wedding (and later, her funeral) and other moments of the (allegedly) whole-nation-together-watching on TV sort. (The Investiture? Really? I was only 2 at the time so don't remember it, but did people really tune in the same way as for the others?)

It is perhaps an irony that the book appears too late to add in the recent death and funeral of Queen Elizabeth II - surely the apotheosis of this kind of shared experience. I certainly read the part dealing with the funeral of Diana - with its evocation of the ever-thickening crowds and then the comment that 'the Queen had not even returned to London from Balmoral' in a different way to how I might a couple of months ago. A persistent problem, perhaps, with anything touching the British royal family is the abundance of potential meaning and there being just too many references - Coe intended I think to use Diana's marriage and funeral to make a point about the refusal of the Lambs to properly welcome Bridget, a woman marrying in who's not from a White British background ('families like this... they never really accept people from outside, do they?' ) but actually when that's more or less reflected in the ballads every single day it might seem just obvious).

Coe portrays both the immediate consumption, as it were, of these moments - families gathered around flickering monochrome TV or flatscreen panel or sat at bunting-decked tables in the street - and the weeks and months around them, following several generation of the Lamb family. It all starts with Sam and Doll Lamb and their daughter Mary in Bournville, a suburb of Birmingham dominated by the Cadbury's chocolate factory, in 1945. The book plugs into the wider Coeniverse, featuring characters from earlier novels, sometimes as walks-ons (I glimpsed a couple of Trotters!) and sometimes in more significant roles (David and Gill Foley and their father Thomas - as Coe points out in his Afterword, this book has a particularly close relationship to Expo 58, The Rain Before It Falls and Mr Wilder and Me).

For me, that embedding gives the book wider resonance, drawing on established characters and filling in gaps in the chronology, though it made me ache for a family tree. There would definitely be a market (well, of me) for a Coe Companion. It goes some way to address what is otherwise an inevitable result of the episodic nature of the book, that its alighting on particular moments from decade to decade risks a sort of "1970s House" ness - you know, the reality series where a family move through a year in each episode, their technology, food and possessions being rudely updated each time.  Coe tells us for example that 'there is a new shop on the King's Road, apparently - she has read about it in the Sunday Times colour magazine - which is called Habitat...' and we know that now the 60s are Happening. Or a character will be proselytising the virtues of the Sinclair ZX81, demonstrating that the age of the home computer revolution are upon us. I'm not saying that these moments ring falsely - the ZX81 thing is part of fleshing out a character who others comes over as rather unsympathetic, for good reasons - just that with relatively little space for each episode, references like this seem a bit obvious, and can rather draw the oxygen from character development.  Similarly there is a sense of characters being placed to experience or expound something - nearly witnessing the birth of balti cooking for example, or set up to compare bland postwar English cooking with the spicier, smokier German version.

Bournville does, though, tackle these moments of change, or potential change, in another way. As they witness national celebrations and mourning, characters here are prone - as I think we all are - to read a significance into things, to look for turning points and moments of decision. Of course these are often overturned subsequently (so, in a sense, the glimpse of a future Utopia at VE Day, with the Attlee government waiting in the wings, is soon undone by an Establishment that its able to stage the Coronation - Geoffrey's delighted musing: this marked the resumption of normality, like 'like a breath of stale air...'). By the end of the book we're more inclined perhaps to accept that (as is repeatedly stated) 'Everything changes, and everything stays the same' - whether you take that as comforting, or bleak (the book allows for both points of view).

Given its episodic nature, again, different parts come at the reader in quite different ways. There are lots of stories, story arcs and characters and I think everyone will have their favourites. I enjoyed the family holiday in Wales (but my family used to take holidays in Wales in the early 70s, so maybe it's that) which is virtually a self-contained episode, albeit one revisited later with more understanding.

The funniest was the "chocolate wars" episode in Brussels, intended, I think, as a hook to bring in a certain straw-haired journalist and later politician whose career is touched on briefly (''always under-prepared, always over-committed' who Coe lacerates further in his Author's Note. I don't think though this book is generally trying to be overtly funny - though there are some moments that will produce smiles, for example when Sam was 'entertained by the sound of his daughter [Mary] and Beethoven engaged in mortal combat' or when Mary is dismayed that she and her mother have been invited to a church service to celebrate VE Day: 'This was a dreadful turn of events' (she even tries to get out of it by offering to do the washing-up).

My favourite of all was Lorna's European travels in the Prologue - I felt that her concert tour, undertaken as covid-19 was beginning to close down the Continent ('It would break her heart if this weird little virus were to derail everyone's plans') had the same shrewd observation as much of Mr Wilder and Me. I could have read a whole book about Lorna and her bandmate Mark.

I'm not sure if it's significant that the two bits of the book that struck me most are set outside England. Clearly one can read Bournville as a "condition of England" novel (England, not Britain or the UK, because the current of progress and reaction, of prejudice and enlightenment, that swirl here are portrayed in relation to England). But the most interesting themes are wider than England. It's not, I want to assure you, a Brexit novel in the same way as Middle England, though inevitably some of the same themes occur - like the transformation of the Cadbury factory to a visitor experience, which proceeds in the background of the book, a counterpoint perhaps to the Lamb family's love of James Bond films (those 'strange, adolescent, sadopatriotic fantasies'). And it does have a sense of hope. There are people here who change their minds. There is a refusal by some to buy into the national myth ('It's just that I think there's an idea that some people like to have about the war. That it was a political thing...') There vis also a clear-eyed recognition that if the past, the present and the future are all present at once, then there still 'comes a time when everybody has to pick a side' (Bridget, again).

To conclude, there is a great deal in Bournville and I enjoyed reading it. How far everything is completely digested or made coherent, I'm not sure, but then maybe it shouldn't be, if we're thinking about England. One strange thing that I have to add it that as I was reading the book at breakfast, the BBC morning programme covered the historical discovery, in and around Birmingham, of large boulders deposited by glaciers which were apparently important in the development of geology as a science. One of these was found when the Bournville chocolate factory was built. And where did we see characters in this book going for a drink win VE Night but... the Great Stone Inn!

For more information about Bournville, see the publisher's website here.