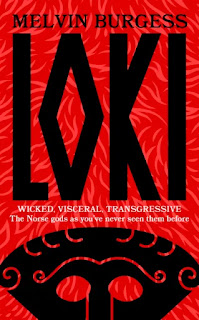 I'm grateful to the publisher for a free advance copy of Loki to consider for review.

I am fascinated by mythology. The stories of ancient gods and heroes seem to have a staying power that has outlasted belief in them. Endlessly invented and reinvented, they clearly remain relevant today, immensely popular and indeed seem to be having a bit of a moment now, especially through feminist versions and as here, those which re-evaluate the villains of the pantheons.

Villains are SO much more interesting than heroes, and Loki is a fascinating example, who's been under close scrutiny of late. Burgess's retelling takes that further, not just giving Loki's estimation of himself but also presenting the stories of Asgard, of Thor, Odin and Freya, from the trickster god's perspective. It's an interesting, not to say at times eye-popping experience. Like (I suspect) many people in the UK, my first encounters with the classic Greek and Norse myths were as a child, via retellings by Roger Lancelyn Green, versions designed to be OK for children and therefore missing out some of the more earthy aspects. In contrast Loki leaves little out, making full use of the mischievous god's full range. He (at times she) is one of the more entertaining and interesting mythical characters, allowing Burgess to fuse the separate Norse myths and legends and create a thematically satisfying narrative. That makes Loki a fluid and engaging read, rather than just a collection of episodes.

The setup here is that we - as modern humans - are being told this story by Loki from his deep prison. Like a celebrity giving an interview following a tabloid storm, he wants to put his side of things, to set the record straight. He's been traduced by the Asgard spin machine, his good deeds edited out, his crimes twisted and magnified. Loki acknowledges himself as a liar (indeed, the inventor of the lie) but promises that, this time, we're getting the truth. And a great deal of the story is uncomplimentary enough to him that we might accept this, although it's also, perhaps, a story spun and pitched to meet our modern sensibilities, showing Loki as the one who preached love, who always counselled peace, who urged (and performed) diversity and tolerance. We may therefore think we are being spun a tale, that he wants something from us. And indeed, as it eventually turns out, he does, though we're assured that is something that will benefit us, in the end.

I'm not sure whether this is meant by Burgess to be a depiction of Loki as a being with a supreme ability to distort the truth, or as a genuinely wronged figure in the narrative that's presented. You will have to read the book and judge.

That reading was for me a fun and enthralling experience, the Norse myths being dismantled and reassembled with a very modern sensibility. Indeed some of the overtly "religiously" aspects are presented in what was for me, as a Christian, a very suggestive way - clearly, for all his confinement, Loki has a good knowledge of the modern work. Take for example Thor's passion, dying nailed to a tree before descending to the Underworld and arising again, bearing the scars of his experience. This was a very horrifying, but also moving, account, as much so for me as any Easter passion. Other elements touch on the modern understanding of gender fluidity, with one of the gods (I won't say who, because spoilers) challenging the rigid, patriarchal regime of Thor and Odin with their developing understanding of their own identity.

Throughout, Loki takes pains to draw himself as the good guy, standing against the authoritarianism of Asgard and for freedom of conscience. He has been misunderstood, he seems to be saying, and the bad things attributed to him are often things that would have happened anyway, or else he was simply carrying out orders for the rest of the gods, and obviously regrets what happened - but what's done is done.

That slipperiness makes Loki, for all the modern enjoyment of a morally grey character, hard, in the end, to actually like. We can empathise with him, yes, especially when some really awful things happen to him, but I'm not sure I'd go so far as to say he is morally conflicted - Loki is always guided at the time, when push comes to shove, by what's best for Loki, even if he expresses sadness after. Mistakes were made, he seems to be saying, but it wasn't, really, my choice.

Overall, this is an exciting and deeply readable retelling. Loki himself is a complex and shrewd narrator whose role is framed with just enough meta-ness to make what he tells us relevant today, rather than being lost in a vaguely medieval Never-Never land. (References to razor-wire defences in Asgard and the like crop up, not as anachronisms but deliberate placings to show us this a story of the now, not the long-ago). It's therefore thought-provoking, but the nature of the central character is such that it's hard to relax with him, so to speak. Perhaps that's the point?

For more information about Loki, see the publisher's website here. Or you could read Runalong Womble's excellent take here.