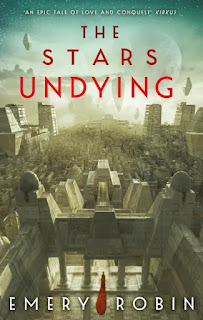 I'm grateful to Orbit for sending me a copy of The Stars Undying to consider for review, and to Tracy for inviting me to join the book's blogtour.
Gosh. What can I say about this one? The Stars Undying really got its teeth into me - it made me resent everyday intrusions (eating, sleeping...) that stopped me reading it.
An achievement, I think, the more so since you'd think a book self-proclaimedly inspired by the empires of Ancient Rome and Egypt (ie the story of Caesar, Mark Anthony and Cleopatra) is going to have to work hard to overcome the reader's assumption that they know what's coming. Some pressure, perhaps?
Well, there's no way Emery Robin lets that pressure show, or that The Stars Undying seems to be straining for effect. Rather, this beautifully written, exciting and sensual novel of rulers, religion, warfare, empire and artificial intelligence (really!) drew me in from the very start. It's a lowkey opening - we see Gracia, a young princess of the planet of Sayzet, fleeing her sister and escaping off planet - but the wiring is immersive and enthralling from there right though to the when Gracia... well, that would be a spoiler, but it's an amazing scene. Gracia's development though all her tribulations and challenges is fascinating, sometime horrifying and always unpredictable: at the beginning she may seem out of her depth, a victim, a loser, but there are depths to her where she finds the resolve to beguile great men - and women - and to plot her own path forward.
Also fascinating is Ceirran, the Caesar figure here, a restless protagonist - I'd hesitate to call anyone here a hero - Commander of the forces of Ceiao, general, politician, schemer, a man in a hurry - but so much more. Both of these, however, are made richer as characters by the complex cultural, religious and political background which Robin sketches - here's where the inspiration from Rome and Egypt really counts, but you also have to  recognise the Hellenistic layer in the background to early BCE Egypt, which Robin also references: the sweep of empires and the deaths of gods and conquerers has left the galaxy portrayed here richly textured, with Gracia, Ceirran and many others having to negotiate a treacherous landscape of historic animosities, debts and paradoxes.
This is nowhere more true than in the capital city of Ceiao, where Ceirran, an outsider on the make, clashes with the descendants of priests and kings. He's aided by his close supporter, Captain Anita who is one of the most fascinating characters I've come across in science fiction or fantasy for a long time - able, cynical, full of contradictions, equally at home on the training field, speaking in Council for Ceirran or dancing in a scuzzy bar, she attracts and repels Gracia from the start, and the tension between them crackles from the pages of The Stars Undying.
While this is a novel characterised by sweeping distances - it's not bothered about covering billions of light years - towering themes (love, treachery, loss and vengeance to name but a few) - and often, a sensuality that simply grabs - it is also a book where the small things count. Details of conversations. The voices here - Gracia and Ceirran, yes, but who is speaking to whom, and why? And actions on the margins. All matter to the working of a complex and satisfying story that satisfies on many, many levels.
All in all, a brilliant book I'd have no hesitation in recommending (and I'm counting down the days till I can read a sequel!)
For more information about The Stars Undying, see the publisher's website here - and of course the other stops on the blogtour which you can see listed on the poster below.
You can buy The Stars Undying from your local high street bookshop or online from Bookshop UK, Hive Books, Blackwell's, Foyle's, WH Smith, Waterstones or Amazon.