#Blogtour #Review - Double or Nothing by Kim Sherwood 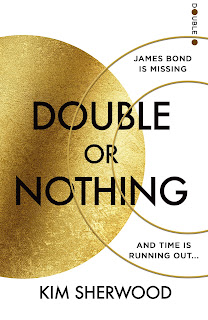 Double or Nothing
Kim Sherwood
HarperCollins, 1 September 2022
Available as: HB, 432pp, audio, e
Source: Advance copy
ISBN(HB): 9780008495381
I'm grateful to HarperCollins for sending me a copy of Double or Nothing to consider for review, and to Anne Cater for inviting me to join the book's blogtour on this, the book's publication day.
BOND IS...
...MISSING???
The extended career of Agent 007, in print and on film, must present the author of a follow-on book with various dilemmas - whether or not to write in continuity, what time period to set the book in, and how far to broaden the universes. But equally, with opportunities, of which Kim Sherwood makes full use in this, the first of a trilogy of Bond novels.
The result is an accomplished, exciting and involving book which shows us a great deal more of the world about Bond while the latter is, well, absent. That fits nicely into recent film portrayals in which he goes off-radar, and allows the introduction of other members of 00 Branch, particularly of 009, Bashir, and 003, Johanna Harwood. We also get to meet Moneypenny, head of  the Branch, and a version of Q (I don't want to say any more about this as the realisation of Q's identity came for me as a delicious shock followed by "yes of course, that's exactly right!")
As book opens, 009 is engaged on a daring rescue attempt. The Branch has fallen on hard times, a mole is feared to be giving away vital information and many members have been killed or have vanished. Bond is only one of these, but he vanished on Bashir's watch and the letter is haunted by guilt. The book contains a fair amount of brooding on ageing agents in a world that has moved on and regrets of mistakes and/ or betrayals (on multiple levels). It has a distinct air of unfinished business which makes the immediate threats - an international criminal/ terrorist gang knows as Rattenfänger and an ambiguous multibillionaire who's name is Paradise and who promises to use his satellite and quantum computing technology to fix the climate crisis - seem almost like annoying, if urgent, distractions from a deeper web of relationships and motivations. Sherwood creates this web of backstory without apparent effort and I very soon accepted all the new 00s, their setting, and their priorities, as part of the new Bond storyline.
That's helped by the way the story uses references - such as mentioning the death of Bond's first wife on an Alpine road, or giving Felix Leiter still gamely playing the game - without either relocating those events near to the present or trying to explain how these can be in the minds of people in the 2020s. It makes the continuity work by not trying too hard to make it work, clearing the way for a devious story that - in the text Fleming tradition - presents a perhaps-monster who needs to be approached and understood. The focus on climate change makes the story very modern; the deployment of outlandish technologies, cocktails, exotic locations, fast car chases, and sinister secret organisation, makes it very exciting, very Bond. There are shoot-outs aplenty, narrow and improbable escapes and, in the behaviours of the MI6 agents, that indefinable sense of élan that you'd expect.
I also had fun seeing how many riffs on book/ film titles Sherwood was able to sneak in - my favourite was "Icons are Forever". As well as being witty, it also summarised a theme of this book, with Bond  cited as believing that an agent's greatest strength is in their myth. For Bond, off stage as it were, it makes him subject him to all sorts of doubts and distrusts. But at the same time, as the actions of 003 and 009 illustrate, Bond is still someone to emulate. Have they swallowed a lie? ('This man, he is a fantasy. The cars, the women, the gadgets, the endurance, the courage, the one man to hold the line and never waver.')
For 00 Branch as a whole, the Bond legend imploding would risk the whole outfit being seen as an anachronism, or worse, as inefficient, a threat to the Service. Better he were dead, perhaps. But equally, several times in this book, for agents with their backs to the wall, captured or threatened with death, it inspires them to come out fighting or to dream up new ploys and strategies to overcome their enemies.
Which is in the end why we read these books, isn't it? For that moment when the scales fall from the villain's eyes (whether or not accompanied by a clever quip from the hero) and he, or she, releases how they've been played, outmanoeuvred, outclassed by a 00. This book has those moments just where they ought to be, and they kick as hard as should.
I strongly recommend it, it is fun from the first word to the last.
For more information about Double or Nothing, see the publisher's website here - and of course in the other stops on the blogtour which you can see listed on the poster below.
You can buy Double or Nothing from your local high street bookshop or online from Bookshop UK, Hive Books, Blackwell's, Foyle's, WH Smith, Waterstones or Amazon. 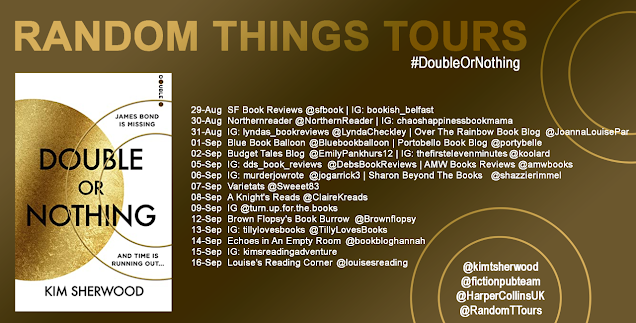