#Blogtour #Review - Whisper of the Seals by Roxanne Bouchard 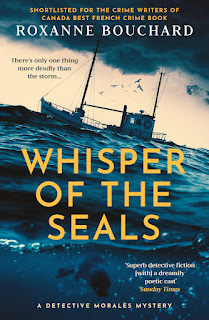 Whisper of the Seals (Detective Moralès series, 3)
Roxanne Bouchard (trans David Warriner)
Orenda Books, 18 August 2022
Available as: PB, 275pp,  e, audio
Source: Advance copy
ISBN(PB): Whisper of the Seals
I'm grateful to Orenda Books for an advance copy of Whisper of the Seals to consider for review and to Anne Cater for inviting me to join the blogtour, on its last day - I'm honoured to be mooring the vessel at the end of an epic voyage!
With her much-loved Detective Moralès series forging ahead, Roxanne Bouchard has rapidly become one of my favourite crime authors, her Canadian settings refreshingly different from anything I'd read before, the characters vivid and well drawn, the stories rooted in ordinary lives and real dilemmas and the plots satisfyingly twisty.
Whisper of the Seals is no exception, while definitely taking a turn for the darker. We rejoin Moralès as he's about to take a much-needed break: after he and his wife have finally divorced, he's joining a winter cruise around the coast, with plenty of stops for cross-country skiing. Moralès is joined by several of his police colleagues, of course there's an active case on and of course, case files are aboard the ship. So Moralès is able to distract himself from brooding on how it all went wrong by joining in the (remote) detective work as forensic psychologist Nadine Lauzon attempts to penetrate the mystery of a teenager who has been murdered in Montreal.
More actively present in the story, so to speak, is fisheries officer Simone Lord, who we also know and love already. She has been posted for the winter to a remote group of islands - Lord regards this as a punishment - to oversee the activities of the resentful fishing community there.
Lord, who in a creepy episode early on we see as - unknown to her - the object of a Peeping Tom, is called out at short notice to join a trawler embarking on a seal hunt late in the season and in worsening weather. She will be aboard with five less than savoury characters, crewmen whose chequered pasts and varyingly desperate presents are vividly brought to life by Bouchard. Bluntly, it's a crew of chancers and worse, men who have little respect for each other or for Lord, and less for the authority she represents. If you sense trouble ahead, you'd be right. The setup put me in mind, of all books, of Treasure Island, reminding me of young Jim Hawkins surrounded by cutthroats and with nowhere to flee to.
Bouchard expertly draws out the tension as the hunt mounts. Some of the scenes will be troubling for readers who instinctively object to the slaughter of seal pups; while there's nothing gratuitous here, it is a frank portrayal of a real way of life, one that relies on killing. Bouchard allows her characters space to express their perspective, including their resentment of the environmentalists who they believe have unwarrantedly targeted that way of life. Whisper of the Seals is not, at heart, an "issues" book, it is not (directly) about that conflict or trying to convince. But the facts of life in a harsh environment are part of the setting and one we shouldn't overlook. Of course, the killing of seals is, one might think, only a narrow distance from the killing of people, and - as the detectives amiably bicker and flirt on their cruise - Lord begins to suspect that something aboard the Jean-Mathieu is badly amiss.
I loved the portrayal of Lord, who we're familiar with already but who comes to the fore here: her background and self-sufficiency - and the doubt and fear underneath. She works in a very male setting, facing appalling treatment and sexism (including from her own colleagues) but this has only made her more determined to excel - something which is then naturally held against her by men!
The characters of the men aboard are also well delineated, especially the (frankly horrible) Tony McMurray who fixates on Lord as a suitable object for punishment in revenge for past actions by the Fisheries service. Now he has one of their members confined aboard a small trawler, he reckons he can take his time finding a suitable way to work out his resentment... Simone's safety will depend on her wits, her courage and her ability to read the room (or rather the ship).
In the meantime, on the cruise liner, unaware of the danger his colleague is in, Moralès considers his past and his future and ponders new beginnings, his thoughts turning to Simone, giving the story a rather delicious will-they, won't-they aspect with the complex Moralès - also trapped in a ship - forced to face some uncomfortable truths about his life.
The two strands come together in an explosive and tense conclusion that, for me, threw everything up in the air again. There's an ending you absolutely must not let yourself be spoiled on, confirming Bouchard as a masterly orchestrator of plot, character and emotion - and her translator here, David Warriner, as able to render all the ins and outs of what is a complex and nuanced book in arresting and readable English.
I can't wait for Detective Moralès 4.
I would give content warnings here for cruelty to animals, and for threatened rape.
For more information about Whisper of the Seals, see the Orenda website here - and of course in the other stops on the blogtour which you can see listed on the poster below.
You can buy Whisper of the Seals directly from Orenda Books, from your local high street bookshop or online from Bookshop UK, Hive Books, Blackwell's, Foyle's, WH Smith, Waterstones or Amazon. 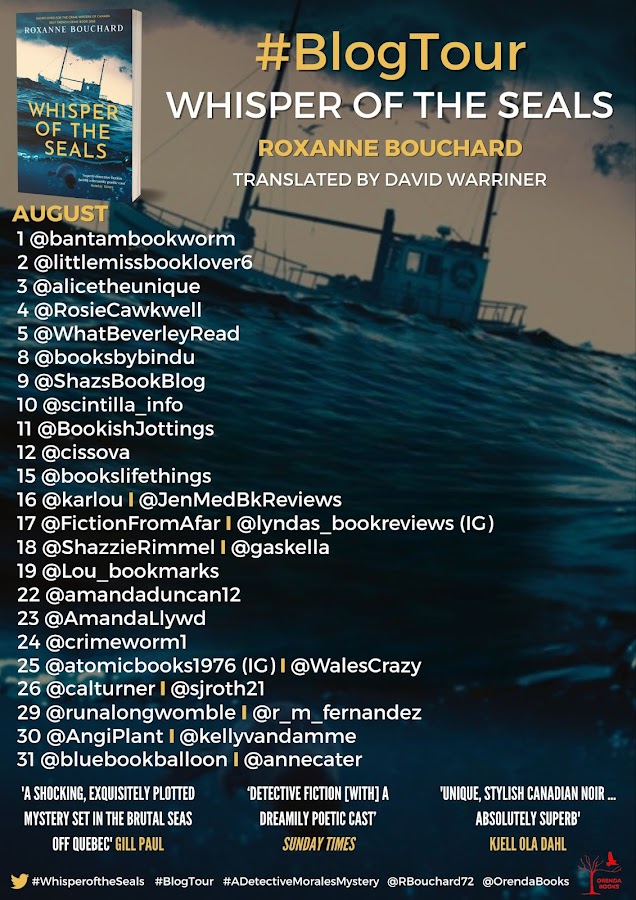