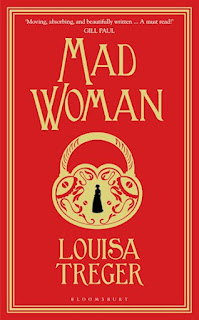 I'm grateful to the publisher for an advance e-copy of Madwoman via NetGalley. I also listened to much of the book on audio, via a subscription service.

Madwoman, which is based on a true story, reads as a very modern account. There are hints of scandal in an institution - the asylum on "Blackwell's Island" in New York - and an intrepid investigative journalist sets out to penetrate the establishment and expose the truth. It gave me something of a jolt to recall that this was taking place in the later 19th century, when women were far from established in journalism, and sympathy for those with mental health problems was nascent at best.

Indeed, the story is very modern in several senses - Nellie Bly sets out with hopes of righting wrongs and exposing abuse, but a century of institutional scandals will warn the early 21st century reader that little is likely to be done. We should not be too judgemental of our Victoria forbears, perhaps.

More widely, Nellie herself is drawn as a fascinating character. A determined young woman, who has survived crisis after crisis following her beloved father's sudden death and her mother taking up with an abusive man, she is a survivor - who perhaps however sees herself reflected rather too clearly in the Blackwell's inmates. Nellie has already shouldered her way into journalism in provincial Pittsburgh, before making her way to New York in search of bigger stories and more freedom. The Blackwell's Island "stunt" is her attempt to make her mark, for Nellie herself is on her uppers, almost penniless and shut out of the male sanctums of the city's papers. Her ambition is at best tolerated, at worst seen as unfeminine, wrong, in some sense, bound to lead to trouble and perhaps indicative of an unsound mind. It's easy to see how Nellie's plan could go badly wrong.

What she is doing - having herself committed to the asylum - is a deeply serious step and Nellie finds conditions worse there than she could have imagined. Abusive and vicious staff, scant and poor food, freezing conditions and hideous punishments rapidly take their dehumanising toll - and even worse is threatened. Treger's story, which in its first half explores and interprets Nellie's early life diligently, really takes fire in its second part as it touches on what Nellie might have been thinking and feeling as she was locked all night in a rat-infested cell; forcibly dunked in filthy, cold water; or half strangled by a vengeful nurse after speaking out about conditions. One quickly realises how high the stakes were for Nellie and how ingrained the ill-treatment of inmates was.

It's a fascinating story which resists any temptation to sensationalise, treating all the inmates of Blackwell's Island with sympathy and humanity and bringing these people - who really lived, a century and half ago, and, many of them, died, in that place - back to life to speak to us. The coda describing Nellie's later life is a fascinating glimpse of an intrepid and brave woman.

The audio itself is deftly performed by Laurel Lefkow, who reflects Bly's newspaper vocation, giving the text just a hint of one of the big stories being read out from that day's paper. We're reminded that, in piecing together Bly's history, Treger's first resource will have been her printed articles: this is a woman who found her voice and her freedom through a modern medium, the crusading newspaper, one of the first to do so. It's the perfect pairing of affect and content.

For more information about Madwoman see the publisher's website here.