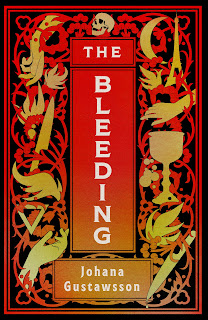 The Bleeding
Johana Gustawsson (trans David Warriner)
Orenda Books, 15 September 2022
Available as: HB, 259pp, PB, 259pp, audio, e
Source: Advance copy
ISBN(HB): 978-1914585265
I'm grateful to Karen at Orenda Books for sending me a copy of The Bleeding to consider for review, and to Anne at Random Things Tours for inviting me to join the book's blogtour.
The Bleeding was for me a welcome return to Gustawsson's writing, writing that shows an uncanny ability to link a present-day mystery with events - nearly always bad, troubling events - in the past.
In The Bleeding, it's a triple timeline.
In modern Quebec, Detective Maxine Grant, who's suffering multiple family pressures (a recent pregnancy; a sulky, difficult teenage daughter; and a husband death in tragic circumstances) is called upon to investigate her old primary school teacher, who's apparently killed her own husband in a fenced attack. (Thirty one stab wounds).
In 1949, twelve year old Lina, bullied at school and neglected by her mother who's attempting to make ends meet after her own husband was killed in the War, finds friendship with the mysterious old lady who lives in the asylum.
And in 1899, Lucienne, a wealthy woman in Paris, loses both her kids in a catastrophic fire. Unable to accept their deaths, she turns to Spiritualism for some answers...
I have to say that the way Gustawsson brings these strands together and uses each to reinforce themes in the others, is nothing short of brilliant. Too much detail would spoil the careful unravelling of the plot, but I did find that taken together, the stories (or the story) amounts to a careful and damning study of the treatment of women in society. The details may be different (Lucienne's treatment by her husband, Lina's torment and public ridicule when her period comes, the pressures that Maxine is under) but they fit together to form a coherent and troubling hole.
At the same time, Gustawsson delivers an intricate and convincing police procedural, the darker moments lightened by the presence of Prof Ginette Montminny ('Gina'), a forensic psychologist assigned to unravel the prime suspect's motivations and behaviour. Gina is, we learn in passing, Emily Roy's teacher, so while Emily does not herself appear, we can be assured that Gina knows her stuff. It's a tribute to the skill of the author, and the desperation of somebody here, then, when a certain revelation occurs which I certainly hadn't seen coming and which cast much of the book in a new light.  (The book is excellent value, it will entertain you twice!)
A vivid and entertaining read, which packs in not only policework, male privilege (and betrayal) and an arresting depiction of life in three different epochs (showing not only how much has changed, but how much has not) but also, as if that weren't enough, a disturbing vein of the supernatural and a slightly sulphurous hint of corruption being passed from generation to generation. Innocent blood is both prized and at great risk here and one can't but feel that a final reckoning is coming.
All in all, another fine book form Gustawsson which David Warriner's translation serves excellently, producing English textured just enough to hint at the story taking place in a non-English speaking locale but not so much as to get in the way of a smooth read.
For more information about The Bleeding, see the publisher's website here - and of course the other stops on the blogtour which you can see listed on the poster below.
You can buy The Bleeding from your local high street bookshop or online from Bookshop UK, Hive Books, Blackwell's, Foyle's, WH Smith, Waterstones or Amazon. A limited signed and numbered edition with  sprayed edges is available from Goldsboro Books 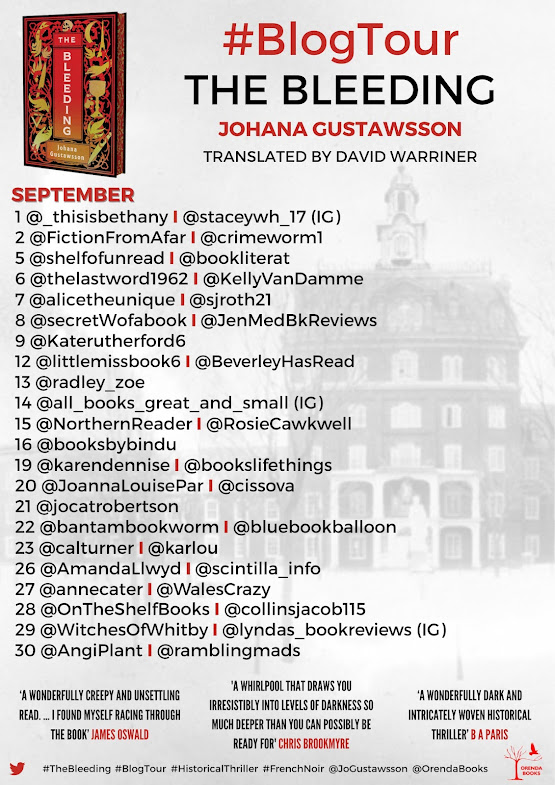