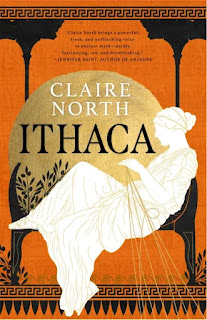 Ithaca
Claire North
Orbit, 8 September 2022
Available as: HB, 400pp, e, audio
Source: Advance e copy
ISBN(HB): 9780356516042
I'm grateful to Nazia at Orbit for an advance copy of Ithaca to consider for review.
Ithaca is a story of Queen Penelope, waiting at home while her husband Odysseus gallivants his slow way home after the Trojan War.
I have tended to be wary of Greek myth retellings, and I'm not sure why. Something about having read these stories in school perhaps, but also about Greek mythology being almost too rich a serving of the incredible, just one bizarre thing after another, coupled with petulant deities?
But Claire North is one of my absolute top favourite authors. Across novel after novel, she's served up the bizarre in the normal, making astonishing themes seem part of everyday life, and making ordinary people, extraordinary. So if anyone can be trusted to do something magical with this material, it's North - and I just had to look at what she'd do.
In outline, this is a fairly well-known story. Seventeen years ago, Odysseus took all the fighting men of the island with him, and of course the gold, so Penelope, and Ithaca, are unprotected and - with doubts spreading about whether he will ever return - she is subject to the attentions of a pack of suitors. With some help from the gods, Penelope outwits them. So much, I vaguely remembered. Bands of ravening pirates however also threaten Ithaca (an addition by North I think) and the old men and boys left behind by Odysseus are wholly incapable of seeing them off. What's a queen to do?
Which is where North makes this story her own. She fills this world - poised uneasily between myth and history - with real people (even when some of them are gods). And she intelligently and compellingly supplies a rationale, a world, a motivation for what happens here. For Penelope's plight. For the whole, appalling enterprise of the Trojan War. For the business with the suitors.
That motivation is, of course, the patriarchal system that underpins everything, a system reflected in the lives both of mortals like Penelope and of the gods themselves. The story is narrated by Hera, Queen of the Gods and also wife of Zeus - and she is VERY careful not to draw his attention to what she's encouraging on distant little Ithaca, because it would be seen as rebellion against the male power that's dethroned her as the primordial goddess of fire.
Similarly, Penelope, left a very tricky hand to play while Odysseus is off strutting his heroic stuff, has to weave together an ever shifting web of alliances, expedients, trusted allies, manipulated guests, commerce and - as we eventually see - clandestine military operations to keep herself and her son alive, her island at peace and a place ready for returning Odysseus. And she has to do it all without seeming to claim a place in the Royal council, without actually giving advice to any man, and indeed, in spite of the very clumsy attempts by the men - who think they're in charge - to direct things.
The world in which this all takes place is gradually revealed to be a nasty and brutish place, especially for women, seen here being sold into slavery, casually disposed of by their master or mistress, taken as prizes in war (the whole focus of the Trojan war, of course) and casually assaulted by the men around them. Again, the behaviour of men and gods is not so different.
This side of things was not, of course, included in the version of these stories I was told as a child at school - which possibly did make them even harder to understand, with motivations and consequences cloaked. In North's retelling, Hera's rather wearied, very arch and thoroughly modern commentary and narrative ably fill these gaps, restoring the story to a wholeness and putting the deeds of women (which, we are assured, the Poets will never sing) back in their rightful place. We see Penelope's dealings with her household, her maids, assorted priestesses (and the frankly bonkers royal couple Elektra and Orestes who arrive from Mycenae mid-book on a mission of revenge, upsetting all her careful calculations).
The story is a delight throughout, very much reflecting North's witty, cool authorial style, but dialled up to eleven and served with an extra relish that completely suits the perspective of the REAL GODDESS that Hera would have us remember she is.
In short, Ithaca is a twisty, complex story fraught with the possibility of lines being crossed - of attracting the unwanted attention of Zeus, or the piracy getting out of hand, or the suitors finally demanding a response - and one carefully located in a world of almost-history, almost myth. This is Greece, but before it put on all its airs and graces.  Half the characters are apparently descended from demigods, under curses or being protected by deities (sometimes all three). No-one yet has any use for writing or for accounting - those strange, near-Eastern technologies - and there is a palpable sense that Greece is not yet the equal of, say, Egypt in the civilisation stakes. Nevertheless, there is also a sense of nascent history, with the seeds of the Greece-that-is-to-be visible in city rivalries, trade routes and an emerging politics. Possibilities seem to fill the air, Penelope's very human sense of guile and skill at managing the rather lumbering gods-in-a-machine pointing the way to the future.
It's a powerful, bewitching and above all, fun story, one I'd strongly recommend.
For more information about Ithaca, see the publisher's website here.