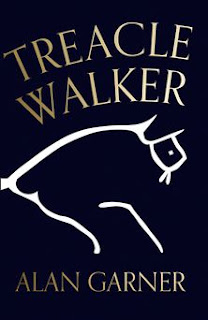 Treacle Walker
Alan Garner
4th Estate, 28 October 2021
Available as: HB, 160pp, PB, e, audio
Source: Purchased HB
ISBN(HB): 9780008477790
In Treacle Walker, Garner shows that an absorbing fantasy doesn't have to be wordy or indeed, lengthy. His short book contains such a concentrated essence of experience that reading it is like playing with one of Philip Pullman's alethiometers - every moment revealing deeper and yet deeper layers of meaning, all coexisting on the same pages.
At one level this is a simple story of a lonely boy, Joe, and his friendship with the rag-and-bone man, Treacle Walker. Joe seems to be alone - his parents never appear and nor do any other adults, except in one scene when he is having an eye examination. (Joe has a "lazy" eye which apparently requires his "good" one to be covered up so that the other will recover. This gives him different views on the world, which as the story develops, will become important). At another level there are mythic themes here, with a bog-body appearing (a bog-body with decided views about Walker). And Treacle Walker's "donkey stones", used to clean the doorstep, carry that image of the White Horse from the cover. Ideas of sacrifice, of recurring cycles through time and of a deep connection with the landscape are explored, as in much of Garner's fiction. And at another level altogether there are part humorous, part sinister threats as words and picture begin to come alive in the text of a child's comic, and in hints here and there of deeper symbolism (as in the bargain and exchange between the two main characters at the start of the book).
It would be wrong I think to try to pick out any one of these "levels" as "the" answer. In this, Treacle Walker feels to me like a distillation of Garner's many books - is like the book that would result if The Weirdstone of Brisingamen AND The Moon of Gomrath AND Boneland were all written down at the same time on the same pages. But it's more than that, it is Garner at his best, exploring some strange region between here and there and bringing it back to us as we sit in the firelight - perhaps beneath a massive fireplace, in an ancient house between a river and a meadow and railway line (triples matter here).
It's a book that rewards a second and third read. There are little puzzles here which fall into place, circularities and co-occurences about the identities of Joe and of Treacle and about their roles - both outsiders, in a vaguely defined place and time which I think doesn't so much date to a particular year or decade as to the time of childhood, which seems here an incredibly precious time, seen through Joe's eyes without the distortions of adult relationships or concerns (apart from Walker's, and that's different).
All in all, a rare and enchanting book (in the truest sense). I'm sure I haven't completely understood it, but I will be back for more!
For more information about Treacle walker, see the publisher's website here.
Email ThisBlogThis!Share to TwitterShare to FacebookShare to Pinterest
Labels: 2021, Alan Garner, Fantasy, myth