#Review - The Jade Setter of Janloon by Fonda Lee 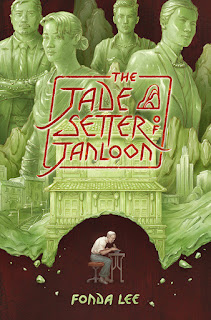 The Jade Setter of Janloon
Fonda Lee
Subterranean Press, May 2022
Available as: HB, 140pp, audio, e
Source: Purchased copy
ISBN(HB): 9781645240624
The Jade Setter of Janloon is a novella set in the world of Fonda Lee's Green Bones saga (Jade City, Jade War, Jade Legacy) which I'd describe as a kind of Godfather-with-magic taking place, in an alternate world, on an island, Kekon, that is rich with South East Asian cultural references.
Over the course of the three books, the two main clans of Kekon, Mountain and No-Peak, clash and, eventually, come to a new equilibrium. The superhuman abilities of the clan warriors (the Green Bones) are derived from their use of jade, a rare and precious substance that not only provides power but is also therefore desirable as a trophy. The artisans who work that jade are therefore key, and foremost among them is Isin, whose apprentice, Pulo,  is about to have a very bad day indeed.
The Jade Setter of Janloon takes place towards the beginning of the Saga, so several Clan characters appear, as it were, in happier times, before the weight of events and responsibilities - which the keen reader of these books will recall - falls on them. It's good to see that, but also good that the clans are not the focus here. In the main books we have seen how the culture of formalised violence plays out for the Green Bones, but in The Jade Setter of Janloon we see, rather, how it affects the lives of the little people (so to speak). When Isin's workshop suffers a catastrophic misfortune - the loss of a powerful jade weapon, the property of one of the clans - all that Pulo loves is placed in danger, with neither reputation nor safety guaranteed unless he can recover the missing item.
So begins a journey through the dark side of Janloon, showing him how the world of the Green Bones coexists with corruption, systemic racism towards Kekon's Indigenous peoples, and a ruthless trafficking operation. Some of these themes were hinted at in the main novels, but it's refreshing to see them addressed here without the cloak of, as it were, privilege that protects the clans.
It's an engaging and fast-moving story, deeply readable in itself but also fascinating as another glimpse of the well-realised and intricate world that Fonda Lee has developed in these books. I'd strongly recommend The Jade Setter of Janloon, whether you have read the three novels yet or not (as it's set early on there are no spoilers for later events).
For more information about The Jade Setter of Janloon, see the publisher's website here.
Email ThisBlogThis!Share to TwitterShare to FacebookShare to Pinterest
Labels: 2022, Fantasy, Green Bones Saga