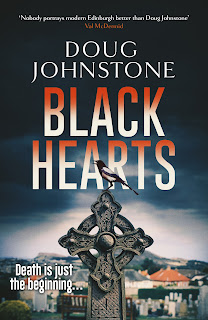 Black Hearts (The Skelfs, 4)
Doug Johnstone
Orenda Books, 29 September 2022
Available as: PB, 260pp, audio, e
Source: Advance copy
ISBN(PB): 978-1914585296
I'm grateful to Karen at Orenda Books for sending me a copy of Black Hearts to consider for review, and to Anne Cater of Random Things Tours for inviting me to join the book's blogtour.
A new book in The Skelfs series, featuring three generations of women who run and Edinburgh undertaker's (with a side line in personal investigations), is always guaranteed to brighten my day. I thought that Johnstone might call it a day after The Great Silence, so it was great to see more goings-on from 0 Greenhill Gardens.
One of the joyous things about these books (sorry if "joyous" sounds like and entry in Poseur's Corner, frankly I don't care, it's what I mean) is the tapestry of closely observed lives at No 0. There is Hannah, whose wife Indy is now working for the firm. Hannah is an astronomy postgrad at the Royal Observatory. She is practical and focussed but reluctant to come out of her shell; Indy has helped a lot with that. Dorothy, Hannah's grandmother, runs the business and also teaches drums (as well as detecting). Originally from California, she remains something of an outsider, observing the Edinburgh scene with a cool eye while frankly being a bit flummoxed by the complexities of her family.
And then there's Jenny, who basically is "the complexities". Hannah's mum, Dorothy's daughter, Jenny is a mess. Readers of the series will be familiar with her storming out of the house to one of Edinburgh's bars, self-medicating with lashings of drink. Notionally she's in therapy, but she rather uses this as an opportunity to cross so many red lines you'd think she was auditing a set of dodgy accounts. Brandon, her therapist, doesn't have a chance.
The three women are gloriously realised, by turns reflective, determined, vulnerable and supportive. You sense they'll always be there for one another, but that means they really do take some shit, especially from Jenny (who is incredibly annoying but also, as she suffers in her black heart, a very empathetic character - I'm struggling slightly for words here). Jenny is suffering - as readers of the earlier books will know - from the aftermath of an abusive relationship (with Hannah's dad, finally revealed as a murdered in The Great Silence). Jenny did what she had to to stop Craig, and he was last seen drifting out to sea on a burning boat. This may have been necessary, but she now finds it hard to come to terms with. The dead are not finished with us, as this book shows in several different episodes of both undertaking and detecting.
I think Johnstone is also very on point in his observations of the Skelfs' customers, by definition people going through a stressful and life event, one forcing them to confront things we normally prefer to ignore. My wife is a Church of England Vicar, so I have seen some of this from close up. While I think the atmosphere is heightened, as it must be in a novel, there's a vein of truth here about that sudden collision with reality, about interrupted relationships and unfinished business - and about how those spill over into everyday life. My wife has only once had to request "police at the funeral" but I recognise the broil of emotions and distress that may lead, as here, to a brawl by the graveside.
Really, I could go on and on about this book. It's just so brilliantly plotted, everyone portrayed so well, the metaphors from Hannah's day job researching exoplanets so apposite - a series of riffs on things so dark they can't be seen, on black holes and much else and their hidden influences: all paralleled in the Skelfs' meticulously described journeys around Edinburgh (I'd love to take a walking tour of the Skelfs' Southside) which also struck me - I lived in Edinburgh for nearly eight years - as straight from life.
All in all, a brilliant continuation of the series. I don't know whether Johnstone will return to this world and I would understand if he tries something else, but I hope that the lights are always on at 0 Greenhill Gardens and that we're back there again soon.
For more information about Black Hearts, see the publisher's website here - and of course the other stops on the blogtour which you can see listed on the poster below.
You can buy Black Hearts from your local high street bookshop or online from Bookshop UK, Hive Books, Blackwell's, Foyle's, WH Smith, Waterstones or Amazon. 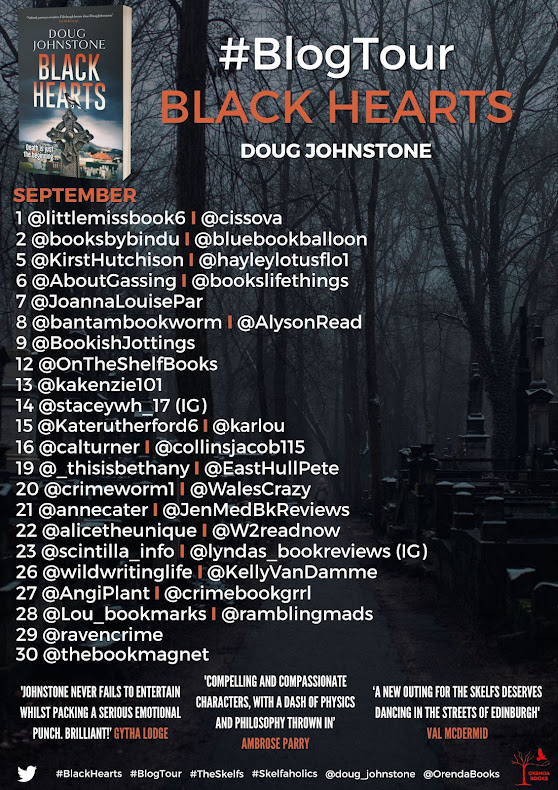