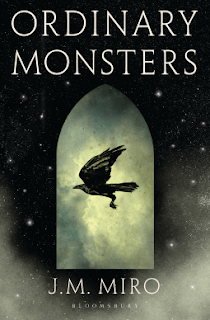 I'm grateful to Bloomsbury for providing an advance extract of Ordinary Monsters by J M Miro. The review below is based on that extract and may not reflect the full contents.

Publisher's blurb: 1882. North of Edinburgh, on the edge of an isolated loch, lies an institution of crumbling stone, where a strange doctor collects orphans with unusual abilities. In London, two children with such powers are hunted by a figure of darkness – a man made of smoke.

Charlie Ovid discovers a gift for healing himself through a brutal upbringing in Mississippi, while Marlowe, a foundling from a railway freight, glows with a strange bluish light. When two grizzled detectives are recruited to escort them north to safety, they are confronted by a sinister, dangerous force that threatens to upend the world as they know it.

What follows is a journey from the gaslit streets of London to the lochs of Scotland, where other gifted children – the Talents – have been gathered at Cairndale Institute, and the realms of the dead and the living collide. As secrets within the Institute unfurl, Marlowe, Charlie and the rest of the Talents will discover the truth about their abilities and the nature of the force that is stalking them: that the worst monsters sometimes come bearing the sweetest gifts.

The first in a captivating new historical fantasy series, Ordinary Monsters introduces the Talents with a catastrophic vision of the Victorian world, and the gifted, broken children who must save it.

What I thought: the opening of Ordinary Monsters reads almost as the origin story for a superhero tale.  Marlowe is discovered in a railway van by a young woman fleeing from her abusive master. Charlie, a Black man in the US South, is a victim of racism, framed for murder and locked in a warehouse where he is daily beaten - and miraculously recovers. The two have come to the attention of a mysterious organisation which wants them.

For good or ill? I honestly don't know. There's a hint, perhaps, in the mismatched pair of detectives sent to retrieve them: Alice, a woman out of place, and the enigmatic Coulton. Both seem marginal figures like Charlie and Marlowe themselves, so perhaps they're on the right side. But what became sin the future, I don't know.

What I do know is that the opening of the story is atmospheric, intriguing and very readable. Miro depicts two very different settings - the dire poverty of London's East End, in an age when the poor might resort to picking up coal in the street or raking through the filthy river mud for lost trinkets. When an avenging "gentleman" can more or less have his way regardless of police or the legal system. It's the dark side of Sherlock Holmes, the disease-ridden, starving and tainted end of town. And then there's Natchez, Mississippi, where an overseer can wield a whip 'just like it was still 1860, just like no war had ever happened and nothing had been abolished and freedom wasn't yet the lie it was proven to be.'

Perhaps, actually, there isn't a great difference. But the story switches fluidly from one locale to another with the special atmosphere of each delineated and within them, as well as the, well, the different weirdness of the two special people who will be important to the later story. Miro is good with character, taking in Alice and Cotton as well, and a number of almost Dickensian personages in London, especially the tattooed wrestler Brynt and her mountebank evangelist friend, Reverend Walker, who take in Marlowe and his saviour Eliza for a time.

All in all, what I've read of this book promises a cracking good read which goes to the weird size of Victoria's time without getting all steampunky.