#Review - A Sh*tload of Crazy Powers by Jackson Ford 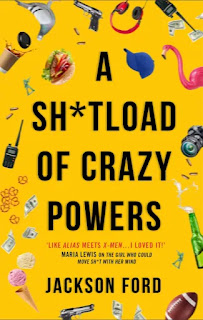 I'm grateful to Nazia at Orbit for an advance copy of A Sh*tload of Crazy Powers to consider for review.
With book 4 in a series, there can be a risk of things becoming stale. Still readable, yes, still what you came to it to get, but - flat. After all, why change anything and risk putting people off?
It's a trap that Jackson Ford avoids here with aplomb. Crazy Powers - while I don't want to say too much about its outcome - upends the safe little world (well, for rather exotic values of "safe") that Teagan Frost, possessor of awesome psychokinetic (PK) abilities and would-be chef (if she can ever scrape together the money to train) has inhabited so far.
A recap. Teagan ('She has zero strategic skills, no filter, a constant ability to screw up even the best-laid plans. She can be ungrateful and whiny, and she takes sarcasm to an Olympic level') was gifted her abilities by mad-scientist parents who endowed her brother and sister with equally awesome, but different, powers (seeing infrared and never having to sleep, respectively). Teagan's brother then killed her parents and sister, and she herself was snapped up by the US Government which uses her for black ops in the Los Angeles area. Over the previous three books we've seen this situation gently come apart, culminating, at the end of Book 3, Eye of the Sh*t Storm, in Teagan sitting in hospital with her friend Annie, who's in a coma, and blaming herself for that.
This story picks up exactly where that previous one ended. Teagan is still battered, drained and haunted by the earlier events, and may have fatally exposed the secret of her powers by saving hundreds of people from a horrifying death, but she gets no rest, oh no. Ford plunges her into the midst of a kidnap attempt which leads up to one of those fabled LA police chases, all broadcast live on ghoulish news networks. From that point it only gets worse and worse. China Shop, the outfit for which Teagan works, is tasked with providing security for a convention of arms dealers (in an LA hotel? Something seems a bit off here) - and she's not even started to recover from recent events...
I loved this book. Totally loved it. Ford blends together a pack of irritable, exhausted operatives, living on shreds of their nerves; a new group of antagonists in the form of a weird, religious cult; and a bizarre location - the hotel itself, a gothic pile with rumoured hidden tunnels, a helipad and secret rooms. And a mystery, whose unpicking will show the whole sequence of books so far in a new light. He's also very sharp on the setting - we meet 'people who are able to take a red pen to black budgets' (watch out, China Shop!) in a milieu where 'Like most crowds of rich people, it's a mostly white, mostly male demographic.')
At the same time, old antagonists also return, affording Annie, who's a likeable and interesting character, a whole adventure of her own in parallel to that of Teagan and the rest. Annie is also battered and bruised, and her escapade - accompanied by Teagan's boyfriend Nic (is there a bit of a spark there? Ouch...) - gives an opportunity for her to reflect on her own early life, sharing details with the reader that we didn't know before. It also illuminates the relationship between her and Teagan, revealing a much more human side to both that Teagan's endless banter and Annie's chilliness has so far concealed. (Teagan's friendship with ex-gangster and drug dealer Annie is touching - 'Teagan is one of the most exasperating, irritating and confusing people that Annie has ever met... but she is also her friend. Maybe her only real friend.')
Both women, basically, get put through the mill here - one can almost taste their weariness and pain - and it's made plain that both care about much more than their own survival. There's a bond there, but there's also a sense of wider ethics and involvement in society, and perhaps also a sense of growing up, maturing (a bit. A little bit.) A reminder that they're not just action heroes. As you'd expect, it makes this a compelling and must-read instalment of this series and one which sets things up for another which I'll eagerly await. Truly, Teagan (and Ford) throw lots of sh*t up in the air and who knows where it will ever come down?
For more information about A Sh*tload of Crazy Powers see the publisher's website here.
Email ThisBlogThis!Share to TwitterShare to FacebookShare to Pinterest
Labels: 2022, espionage, families, Frost Files, LA, superpowers, USA