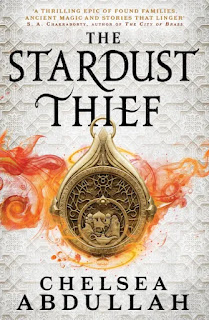 The Stardust Thief
Chelsea Abdullah
Orbit, 19 May 2022
Available as: HB, 467pp, audio, e
Source: Advance copy
ISBN(HB): 9780356517438
I'm grateful to Nazia at Orbit for an advance copy (a SIGNED ARC!) of The Stardust Thief to consider for review.
The Stardust Thief delivers all you could want from intelligent, engaging (and engaged) fantasy: a sweeping, well-realised setting, ancient magics, devious plots and schemes and - most important - a band of absorbing, flawed and complex characters.
It's good on so many levels. It really is.
Loulie al-Nazari is a notorious thief, the "Midnight Merchant", renowned throughout the kingdom for her ability to source priceless magical artefacts which she then sells to her clients. Accompanied by her faithful friend and bodyguard, Qadir, she cuts a glamorous figure - but hides a desperate sadness, having lost her family and indeed her entire tribe at a young age to murderous bandits.
Qadir, too, has secrets: yes, there are things that Loulie, who he trusts absolutely, knows about him which could get him into deep trouble, but he carries an air of mystery even beyond that. An exile, with dangerous powers and skills, whose life depends on not attracting attention, he's appalled when Loulie is summoned by the Sultan, who wishes to employ her.
Also introduced here are Mazen, the Sultan's younger son, and Aisha, a thief employed by Omar, Mazen's elder brother. Without wanting to, the four end up sharing a journey out of town, towards the dreadful Sandsea, habitation of jinn, ghouls and worse.  Deception and double-dealing abound, to be gradually revealed over a series of hair-raising adventures. The story is held together in the meantime by traditional tales, printed here as they are given by storytellers or by one of our faithful band. Reality and folktale blur as we hear of ifrit, magic lamps, cunning bargains driven with fearsome jinn, forty thieves, a storyteller who protects her life by the tales she recounts every night to her lord. And revenge. So much revenge! You will recognise some of the elements, but Abdullah brings them together into a whole that adds depth (and clues) to her narrative. The background is the persecution of the jinn by Mazen's father - we only gradually learn why he is doing this - and human greed for the precious relics that they enchant and which are left behind when they die. My sympathies were rather with the jinn than with humans, but at the same time it's clear they are dangerous, unbiddable beings. (Though the same could be said for other characters here).
Overtly, the story is a quest: Loulie, Mazen and Qadir, in particular, but also several other characters, have a simple - if difficult - task to accomplish, and they think they know what's going on and who they are. But in reality they won't get anywhere unless they learn to trust each other, and to trust they need to understand one another - and themselves. Secrets between friends prove deadly when enemies begin to appear, and while everyone is physically brave and determined (I loved seeing bookworm Mazen learning to understand that about himself) it's clear that other forms of courage than the physical will be needed, including the courage to let go of long-nursed grudges and griefs, to trust, and to forgive.
The Stardust Thief is glorious, not just a well-plotted and exciting adventure story but one where the characters - even the villains - are deeply sympathetic, with all their failings and faults. The adventure is as much internal as external. (It does add a lot though that externally, this is a gloriously portrayed world with a real sense of the numinous in every description and scene).
This is not to be missed, you should go and order (or pre-order) a copy NOW!
For more information about The Stardust Thief, see the publisher's website here.