#Review - The Fall of Babel by Josiah Bancroft 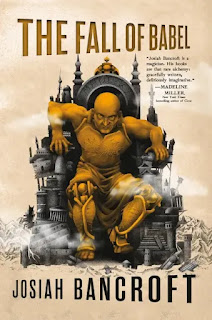 The Fall of Babel (Books of Babel, 4)
Josiah Bancroft
Orbit, 11 November 2021
Available as: PB(638pp), audio, e
Source: Advance copy and audio subscription
ISBN(PB): 9780356510866
Another in my occasional series "David catches up with reviews he should have done last year, but didn't".
I'm grateful to Nazia at Orbit for an advance copy of The Fall of Babel to consider for review.
This is the fourth in Bancroft's series, The Books of Babel, set in a massive tower that stands over a desert. The tower contains, stacked one upon another, numerous polities ("kingdoms") some of which have been explored in previous books and which contrast wildly with each other. It also has its downtrodden serfs, the Hods, who are in rebellion; an enigmatic technologist, the Sphinx, who whole not exactly running the whole tower, influences events; and a host of characters, chief among whom is Thomas Senile, once an innocent schoolteacher who came to the tower on honeymoon with his wife Marya. Separated in the hustle outside the Tower, the two have been trying to find each other ever since, accumulating adventures on the way.
The Fall of Babel, though, doesn't begin with Senlin, it follows another character, Adam, who disappeared a couple of books ago attempting to reach the very peak of the Tower. Bancroft indulges the reader whose memory of precisely who is who and who is where by giving a summary of the position in the style of one of the Tower's periodicals, "The Daily Reverie" - ('A Refresher for the Devotees of the Senile Saga'). This reinforces the sense that Bancroft has been cultivating, in various ways, of the whole sequence as taking place before our eyes, perhaps on a stage, but it's also very useful to the reader who finished the previous book some time ago!
I won't try to summarise events here, but will just say that everyone we've come to know and love (or n to love) returns here: Maria and Senlin, of course, but also Edith, Voleta, Reddleman, Bryon and their enemies, principally Luc Marat, the leader of the rebellion. There's perhaps a more focussed, linear plot than in some of the earlier books, with Adam doing his best to understand the history and origin of the Tower from his study of the strange society that lives atop it, to Maria and co on the Sphinx's flag (air)ship, the State of Art, seeking to prevent a disaster in the Tower's workings by frustrating Marat's sabotage plans. Senile, and his friend John Tarou, are aboard The Hod King, Marat's vessel, which wreaks havoc as it burros through the masonry of the Tower.
There's lots of satisfying combat, and lashings of the quotations, historical references and steampunk(ish) technology that makes these books stand out - they have their own peculiar, slightly sulphurous, tang, rooted I think in the degree to which the Tower has "gone wrong" and fails to live up to the intentions of its creator, the mysterious Bricklayer. His purposes becomes much clearer in the final section of the book which overturns one's whole understanding of the origins, and destination, of the Tower. Bancroft also manages - a minor miracle I think -  to draw together not only the threads of plot (hard enough) but the, how can I say this, moral threads that link the characters: primarily of course the complex relationship between Senlin and Maria, but also the various histories, animosities and misunderstandings between the other characters.
Indeed, this book possibly pays more attention to the latter than the former. I hadn't expected this. In previous instalments the story felt very much as one of Our Heroes desperately seeking to defeat Marat's evil plans/ save the Tower from a catastrophic malfunction. While that aspect is still here and still very much the explicit driver of the story, once I got to the end I did wonder if the group had actually done much of this themselves or if other forces would have sorted it anyway. Nevertheless, at the same time, the story had explored much more than I expected of the relationships and histories of the main characters and in very different ways - Senlin, imprisoned by Marat, has lengthy and deep conversations with him, Adam finds his and his sister's life literally made into a spectacle by a ghoulish documentary producer, and so on. These histories and the way they play out on this final instalment of the series were often rather moving and always deeply interesting, rounding everything off in a much more satisfying way that mere action (also, much more satisfying than my poor description conveys).
So, a good ending to this series, I think - if a rather different one than I'd have expected given the first three books. I'd recommend, though of course of you've been reading these you'll want to read this one anyway and if you haven't, it's is obviously NOT the place to start.
For more information about the Fall of Babel, see the publisher's website here.

Email ThisBlogThis!Share to TwitterShare to FacebookShare to Pinterest
Labels: 2021, Books of Babel, Fantasy