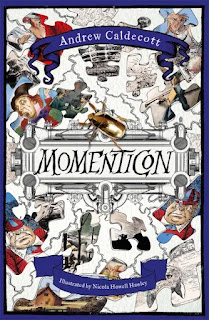 Momenticon
Andrew Caldecott
Jo Fletcher Books, 12 May 2022
Available as: HB, 362pp, e, audio
Source: Advance copy
ISBN(HB): 9781529415421
I'm grateful to Jo Fletcher Books for an advance copy of Momenticon to consider for reviews and for inviting me to take part in the social media blast.
If, like me, you are a fan of Caldecott's Rotherweird series and eager to get another the fix of that slightly out-of-kilter world, then your wait is over - while Momenticon is set in a different (and in many ways darker) world, there is more than enough kinship between this book and the eccentric characters, contrivances and convolutions of the earlier series to satisfy. Momenticon is, thoug,h rather more direct about what's going, making it generally tauter with a greater sense of peril from the start.
We are in a post-apocalyptic world, some years after the "Fall" (but not so many that it has passed out of memory). Fogg, to whom we're introduced first, is the curator of a museum which contains many of Earth's greatest artworks. Shielded by a chitin dome to keep out the caustic gases that have destroyed most life, the museum is isolated, and has no visitors. (There's a digital counter, just to make sure). Three years into this role, Fogg has settled into a routine, taking his meals as paste from the "rearranged", doing exercise under the stern eye of his AI personal trainer, and inspecting the exhibits. Nobody comes, and nobody leaves, and Fogg doesn't enlighten us about his history.
Until Morag appears.
Fogg's and Morag's meeting provides an excuse for them both to tell their stories (or bits of them), explaining more about the world they're in which is dominated by two organisations, Tempestas and Genrich, broadly working in the arts and the sciences respectively; about its dependance on dwindling stocks of chitin and tantalum; about the array of strange characters they've met and who have directed them where they are now. It's a complex, desperate story full of loss and abandonment, co-option into others' plans, ambition, and revenge. The upshot is that the scattered communities which have survived the Fall are in danger, but also that a faction or factions are placing Fogg and Moral in danger. They must leave the Museum Dome and find a way to live outside.
That's the cue for a series of breakneck adventures, including journeys by airborne ships (not airships, proper ships but flying), encounters with the enigmatic Lord Vane, head of Tempestas, and his disturbing son, Cosmo; flights from danger into danger and a deeper and better understanding of art. I really mean that - just one of the threads here is the "momenticons", little pills which allow the taker to be present at the creation of a work of art, briefly ("moment icon", yes?) Building further on this idea, there are villages and town set up to recreate paintings from Fogg's museum and roving characters taken from books (especially, the Alice books). Fogg's perfect memory for every last detail of those artworks will prove important - as well as a ragged and committed band of holdouts who are opposed to Vane's, and Lord Sine's (of Genrich) plans... whatever these are.
What else? lost parents. Families where all is not what it seems. Arcane machinery. Postcards. And, at every turn, those spillovers from Alice - not only characters, but themes such as the Looking Glass chess-world that Alice moves through and, most of all perhaps, an air of puzzle-ality, if I may invent a word, to everything - a layering of mysteries and challenges where, just as one is about to solve a riddle, another pushes it aside, leaving a nested series of conundrums which it is vitally important to understand. (Not so easy when you're being pursued by mechanical huntsmen, minions with crossbows, or actual slithy toves).
Quite simply, Momenticon packs an enormous lot in, keeping its protagonists (and the reader) on their toes througout, if rather dizzy, and taking both into a deeply strange but also deeply compelling world.
I'd strongly recommend.
For more information about Momenticon, see the publisher's website here.
You can buy Momenticon from your local bookshop, or online from Bookshop, from Hive Books, Blackwell's, Foyles, WH Smith, Waterstones or Amazon. 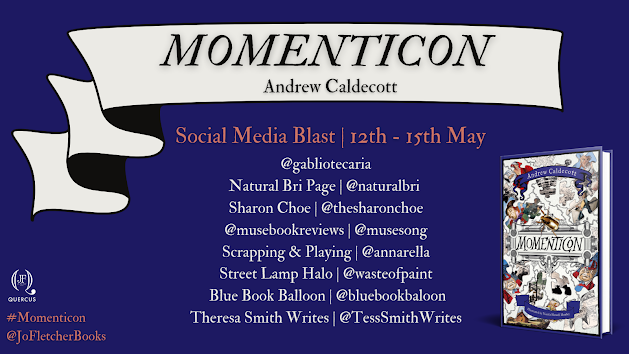