#Review - The Great Witch of Brittany by Louisa Morgan 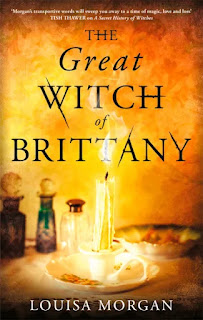 The Great Witch of Brittany
Louisa Morgan
Orbit, 17 February 2022
Available as: PB, 432pp, e, audio
Source: Advance copy and audio subscription
ISBN(PB): 9780356516820
I'm grateful to Orbit for an advance e-copy of The Great Witch of Brittany. I also listened to parts of the story as an audiobook, ably and atmospherically narrated by Polly Lee (who rises magnificently to the challenge of portraying the range of accents that the setting and characters demand).
The Great Witch of Brittany is I think the fourth in Morgan's "Witch" series (the others being A Secret History of Witches, her first, which I haven't yet read, The Witch's Kind and The Age of Witches). It follows the life of Ursule Orchière, who at the start of the book, in 1741, is a young Romany woman living with her mother and her wider clan in Brittany. Through the course of the story, Ursule and her mother suffer many trials. Ursule discovers and grows over decades into her magical abilities, while her mothers suffers an appalling ordeal that leaves her with mental scars, eventually becoming speechless.
The story spans decades, including the birth of Ursule's own daughter and, eventually, her grandchildren. We see death, birth, prejudice, the impact of wider events, and always, always, the little details of life, whether's Ursule's tasks on the farm where she has settled or the particulars of her magical practice. Morgan is good on details - whether Ursule is churning milk, tending a sick goat, meaning a wall or brewing a simple to assist in childbirth, there's a directness to the descriptions here, celebrating all those moments which make up a life well lived, despite challenges that may seem overwhelming.
The story is given in several parts, structured around short, legendary narratives of of Ursule's witchy predecessors, their names and titles - 'The Prophetess Liliane, The Lady Yvette, Irina from the East' - recited almost as a liturgy in her magical ceremonies (recalling the names of saints in the Mass) and leading inexorably up to a final section of the book which summarises the deeds of 'The Great Witch of Brittany' herself, Ursule, somewhat embellished, as the reader will realise, after the manner of legendary material.
There is, then, a certain pre-determinedness to the outcome, but Morgan doesn't let that undermine the sense of jeopardy for her characters or, indeed, the losses and reverses they suffer. Nor does she allow Ursule to be all-powerful, all-knowing or invincible: she may come into great power but she isn't, especially at first, particularly wise and she makes innocent mistakes that cause great harm to herself and those around her. Indeed, almost to the end she's prone to fly into a rage when her family is threatened. and in late 18th/ early 19th century France, there are many threats and, as I have said, much prejudice against the Romany. But there is also kindness, solidarity and friendship though it can take Ursule some time to recognise it for what it is.
Overall, an engaging and heartfelt story using Ursule's position and powers as a witch to explore the place of women in a turbulent age.
I only had two reservations, neither of which really detract from the story.
First, in a book set between 1741 and 1820(ish) I expected a little more impact from historic events - yes, the story is set in a remote country district and yes, there is an eruption of banditry due to the "Terror" but no other impact on Ursule and Agnes's lives from what was a series of wars, invasions and political turmoil.
Secondly, Morgan goes further than just making Ursule a (rather powerful) witch and has her practicising what I think is pretty much modern paganism/ Wicca or something like it (complete with feast days borrowed from both Celtic and Norse mythology and indeed - Lammas - Christianity) and portraying it as the religion of her Romany. I was a bit uneasy about that in principle (in her other books that I've read the protagonists are not members of similarly marginalised groups and they are not given such a detailed belief system) but I suppose this is in the end a fantasy, the Romany people described here may I think be inspired by groups in our world, but this is not our world. It is I think done very respectfully.
And Ursule's outlook is in the end basically syncretistic - in another plot strand, she purloins a relic of St Anne, the mother of the Virgin Mary ("Holy Annie, God's Granny" as I've heard her described). The sliver of bone, housed in its reliquary, is fully integrated into (and clearly, in some way, cooperates with) Ursule's ceremonies  and workings, and "Anne" is recited along with the names of the other "grandmères". A certain pragmatism suits Ursule's character in the end, I think: she is about survival and protection of her family above all, rather than any kind of social or theological purism, and I will therefore take the belief system described as fairly personal to her, in this world, regardless of its resemblance to something in our world..
I'd recommend The Great Witch of Brittany overall. (It was great to see that in Morgan's afterward she gives a shoutout to a book I loved as a child, Rumer Godden's The Diddakoi).
For more information about The Great Witch of Brittany, see the publisher's website here.
Email ThisBlogThis!Share to TwitterShare to FacebookShare to Pinterest
Labels: 2022, Brittany, France, witches