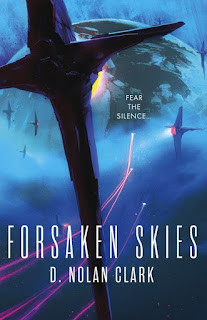 Today I'm honoured to be joining the blogtour for Forsaken Skies, Book 1 in author-of-mystery D Nolan Clark's sequence The Silence. Forsaken Skies was published by by Orbit on February 23rd, and the author agreed to answer some questions here.

Commander Lanoe is one of the Navy's greatest heroes, but the civil war left him with nothing but painful memories. When a planetary governor is murdered, it falls to Lanoe to hunt down the killer and bring them to justice.

Yet his pursuit will lead him towards the greatest threat mankind has ever faced.

An unknown armada has emerged from the depths of space, targeting an isolated colony planet. As the colonists plead for help, the politicians and bureaucrats look away. But Lanoe has never run from a fight - and he will not abandon thousands of innocents to their fate.

An intriguing setup, I think... so without further ado... over to you, D Nolan Clark!

Q: How did you get started with writing?

When I was six years old I saw Star Wars for the first time. I saw it about half a dozen more times. Then came the inevitable realization: there wouldn’t be any more of it to see for years. This was even before VCRs were available—once a movie was out of the theatres, that was it. I started reading SF books, devouring them really. When I finished the shelf at my local library I realized that if I still wanted more science fiction, I would have to make my own. My first projects were pretty terrible, but I could never get enough. It’s a process that’s never stopped.

Q: How long were Lanoe and Valk in your mind and when/ how did you “find” them?

Those two pretty much created themselves. I knew I needed an embittered hero, someone who had literally seen everything but still had a good heart. Somebody who would take on a risky mission because it was the right thing to do. Valk came next, because Lanoe needed someone who would balance him out—a good-natured, self-effacing kind of guy. Traditionally you would give the hard-boiled veteran the tragic backstory, but I figured I would change it up a little. Valk was injured during the war and now he’s in constant pain, unable to take off his space suit because it’s the only thing keeping him alive. He should have been a real miseryguts, but instead he’s the heart of the team, the one who complains the least. The rest of his story surprised even me, but it felt so right when it came to me that I had to run with it.

It wasn’t really that concrete. The characters shape the plot, but the plot also demands a certain kind of character. The two kind of grew around each other—Valk’s story, as I mentioned, wasn’t in my first preliminary outline at all, but it became central to the story. Lanoe’s need for other people (and his constant rejection of them) gave me Maggs, and Zhang, and Ehta—all of whom added something of their own to the plot.

Q: How much control do you have over the characters? Did the book ever take completely unexpected turns?

Yes, but most of them happened in the development process. By the time I actually started composition, I knew how the story ended and what would be left of the various characters. The biggest surprise that happened during the actual writing was that I discovered just how human these characters were, that their actions weren’t just based on heroism or abstract character motivations, but changed over the course of the story. It was a lot of fun getting to know these people, even as I tortured them and constantly threw them into peril.

Q: I’m interested in how authors make their settings real - with real world set novels you can visit actual places or places that might resemble or inspire locations. This could be difficult for space opera! How do you approach this?

It’s tough, but it’s crucial. A big part of Forsaken Skies is that the characters are defending a specific planet, a place that means something to them. I had to put a lot of work into shaping Niraya, the backwater world. The key is to find small details, things that don’t matter at all to the plot, and question how they shape the day to day lives of the people there. For instance, I knew Niraya was a dry, canyon planet with one big city and then lots of farms tucked away in remote places. I started thinking about what was happening on those farms (which never appear in the book!) and I did a little research and realized that the best livestock for a place with no real atmosphere would be large birds, like ostriches and emu. The idea of cowboys rounding up herds of emu really tickled me, and it shaped how I saw the planet. I also knew that the people who lived on Niraya had gone there for religious freedom. I needed to create a bunch of futuristic religions for those people to follow—some for comic relief, some that I wanted the reader to find respectable. That shaped all kinds of things, from the architecture of the churches to the clothes people wore to the opportunities available to the children of the emu ranchers. It’s a process that takes a lot of time, but it’s ridiculously fun!

Q. Which writer(s) do you admire most?

Q. Did any writing (or other media) particularly inspire Forsaken Skies?

The book is directly inspired by Seven Samurai, and to a lesser extent the American version, The Magnificent Seven. I’d be lying if I said otherwise! I like to think I didn’t just copy Kurosawa, though, and added my own dimension to the story.

Q. What were you trying to achieve with the book (beyond writing a great story!) (perfectly OK to say “go and read it if you want to find out”!)

I wanted to write the book that I thought I was going to write when I was six years old. The book I tried to write when I was thirteen. Back then I didn’t have the skill as a writer, but also I lacked life experience—it’s something you just can’t fake. You have to be burned by life a bunch of times before you begin to understand it, before you can write about real human beings. It’s taken me almost forty years to learn how to write this book, and I’m thrilled with how it turned out.

Q. You’ve got two more books in The Silence sequence coming so it’s safe to say the story isn’t done yet! Can you say any more about what’s coming up?

Not without spoiling the ending of Forsaken Skies, which changes everything. But I can say that the story doesn’t end at Niraya. That the alien fleet which menaces the backwater world isn’t done with humanity, not by a long shot. It’s fair to say that the collision between these two species—us and them—is going to complete reshape both, and alter their respective histories forever.

Q. Finally, a question that isn't directly the book. Your ship has been damaged crossing an asteroid field and you’re sealed in an escape pod. You were able to grab one book - any book - as you fled. Which would it be?

Jeez. The longest one available. I would hope, if I was living that far in the future, I would have access to a whole library of ebooks! But, honestly, that’s kind of the story I’ve already lived. The answer is I would read anything I could get my hands on—and then I would make up my own stories, for as long as it took.

Thank you so much for answering those questions.

Forsaken Skies is out now and you can buy it from your local bookshop or here, here, here or here. 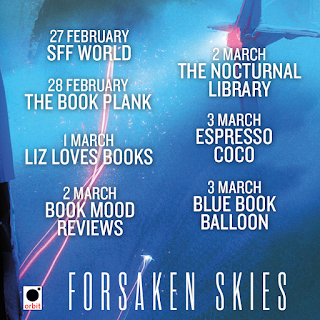