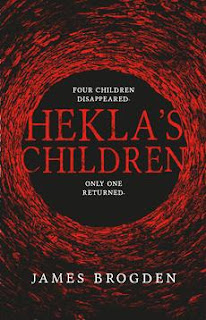 I'm grateful to Lydia Gittins at Titan Books for an advance copy of Hekla's Children.

A decade ago, teacher Nathan Brookes saw four of his students walk up a hill and vanish. Only one returned – Olivia – starved, terrified, and with no memory of where she’d been. After a body is found in the same woodland where they disappeared it is rest believed to be one of the missing children, but is soon identified as a Bronze Age warrior, nothing more than an archaeological curiosity. Yet Nathan starts to have terrifying visions of the students. Then Olivia reappears, half-mad and willing to go to any lengths to return the corpse to the earth. For he is the only thing keeping a terrible evil at bay...

I greatly enjoyed this clever, multi-faceted novel. Rooted in landscape and myth, it explores - but in its own way - some of the same territory of "post portal stress" as, say, Alan Garner's Boneland or Seanan McGuire's Every Heart a Doorway: children disappear into the Perilous Realm, and come back... and then what?

One of the reasons I liked it so much can't really be gone into without a BIG spoiler, so I've discussed that at the end of the review. I'd advise you now to read that bit till you've read the book. (And you MUST read the book!)

So, we have children - well, teens - scooped Somewhere Else and the aftermath of that in at least one mixed jp life. But the events that summoned Ryan, Scattie, Liv and Bran are not over and done with - though they are rooted in the distant past. In a time of sudden death, of bad harvests and cold, a hungry ghost prowls the forests, an afaugh. As a defence, a tribe choose their best and bravest warrior and set him to guard the paths between the worlds. "Then we'll set a man to watch" as the old rhyme has it: Barkfoot too protects a bridge. But time brings forgetfulness, the Spirit Dances cease and offerings are no longer made - and in the 21st century, archaeologist Tara Doumani is called to examine a mummified body found in a Midlands park. Could it connected to the children who went missing nine years before?

No, she concludes, it's older than that. But doubts begin to creep in: Nathan, the teacher who was responsible for those kids turns up, having begin to see them around him and he, in turn, looks up his ex, now happily married and horrified that the past is coming alive again.

And in the dark places, something hungry is waiting.

"This is happening now. It is always happening..."

I was impressed by the way that Brogden weaves together all these viewpoint characters - and more in fact but I don't want to give too much away! - into a coherent story. It's unsettling at first, especially as we soon realise that some accounts are being held back, and in fact a major character doesn't therefore come on the scene until two thirds of the way into the book. And other characters change their role pretty drastically as things go on.

Nathan's is perhaps the main viewpoint: we see his pain at the "loss" of the kids but also his self-absorption in his (lack of) a relationship with Sue - which is what arguably causes the kids to be unsupervised in the first place. Nine years on he's determined to get to the bottom of things (and reclaim his lover?)

We also see his quest for the facts, which challenges conventional understanding of history, myth, reality and indeed time itself. One of the more amusing aspects of this is the struggle that those most rational of professions, the police force and the archaeologists, have when the facts won't fit.

Again, Brogden masterfully knits together history, myth and the topography of the West Midlands (not the most promising of landscapes - compared, say, to Garner's Alderley edge) so that everything does - in the end - make sense. In doing so he also addresses a very modern archaeological concern - what should be done with ancient human remains - and strongly suggests they shouldn't simply be dug up and taken away. Arising first where Western investigation has disturbed indigenous
burials, this issue has now, as it were, come home and so we see a campaign against the excavation of "Rowton man" as vans are wrecked and graffiti - "PUT HIM BACK" appears in various places.

Why, exactly, who "he" is, and what he has become are all questions central to this book. They need to be answered, but the point is not just just to understand things, but to change them. Because that hungry ghost is still out there and the answers are needed if it is to be stopped. But we don't just need answers, we need a champion. Who that might be is something you may guess, or you may not. I'll just say that the denouement, when it comes, is satisfying, and right - and when you read it you'll realise perhaps that one of the main themes of the story hasn't quite been what you thought.

A great adventure, involving writing and lots to turn over in your mind.

And now for that spoilery bit. Carry on below if you dare!


THERE ARE BIG SPOILERS HERE AND I WON'T WARN YOU AGAIN

One thing that appealed to me A LOT in this book was Brogden's clever switch of focus. The book begins as a very "traditional" type of fantasy - make warrior is Chosen and Sacrificed to be the Guardian of the Way Between the Worlds. He waits with his Magic Spear, fending off the Ancient Evil. Roaaar!

Then things go wrong and another Hero arises. Clearly he'll take the place of Original Hero. New Hero sets out to track down and avenge the lost kids. Roaaaar!

And then... it seems we have a bot of a problem here. Original Hero went bad. Surrogate Hero goes bad. It seems waiting 3000 alone years in a dank wood isn't a good way to keep your hero-ness polished. Nor is brooding for NINE YEARS over your ex in a remote Welsh quarry. Now, I have to say I was rather taken aback when Nathan went bad. It seemed very sudden and while Brogden did lay some groundwork for this, I'm not sure it was enough to convince.

But setting that aside, I loved that what happens is that it's women - three, of course - who step in and save the day, and what they do, and why, is  thoroughly in keeping with the way the story has been set up, the mythy ideas Brogden's been exploring, and most of all with the character of the three. It also sets up a wholly different dynamic for the Guardian stuff - a communal, person-centred effort rather than the Sole Brooding Hero thing.

Scattie, in particular, is a wonderful character, held back until the later part of the book when she gives it a definite lift. And she's far from a Distressed Damsel awaiting Rescue (as Nathan would have had it). I'd have liked more of her in the story, frankly, but I can see why that didn't happen.

So, with one reservation about the "hinge" of this book, I think Brogden delivers something that is in the end much more challenging and different than the bog-standard (see what I did there?) portal fantasy this might have been..

So, as I said, strongly recommended.