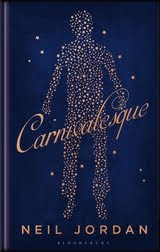 I'm very grateful for an advance copy of this book via NetGalley.

This was a strange book to read and review. At times I liked it a lot. At other times - especially in the final quarter - I felt I was reading a different book, still excellent but taking a different direction. It was though a rewarding and different book that took me to new places and combined the fantastic and the personal in a fresh and engaging way.

The carny world - fairgrounds, carnivals, circuses - is always a good setting for a novel: the self-containedness of the travelling show, the shifts in scene as it moves across a country, a continent, the garishness, the front, the glimpses behind the scenes. Above all the contrasts between what you're meant to see and what's really going on.

Jordan combines all this with a good dollop of creepiness: there's an ancient mystery at work in this carnival, which has become home to... let's say unusual performers, who draw with them unusual enemies. All this is told allusively, through hints and guess: even the carnies, we understand, have forgotten the details, such is their age and so scrambled have their origins become. But certain terms are avoided - and when a boy starts asking questions about them - well, he'd have been better off not.

It works really well, as we explore the carnival through the eyes of Andy, an Irish teenager who persuades his parents to stop at the carnival one day. Then he walks into the Hall of Mirrors... and comes out again. Only it's not him, not exactly. Everyone has a reflection, after all - so part of Andy remains in the carnival and part rejoins his parents. Are they two different sides of him, like Dr Jeykll and Mr Hyde? or has the mirror made a new Andy? If so, which is it - the boy in the carnival or the one who returns home?

This part of the novel works well for me as a metaphor made real - the essence of science fiction - for Andy's, Dany's growth into adolescence. This is a central theme of the book (later we meet Andy's mother surveying the teenage girls who have blossomed over a summer, reappearing in fake tan, high heels and short skirts). We see, as it were, two sides to the boy: on the one hand a sullen young man, on the other a person filed with wonder at the sights and events and mysteries of the carnival and of its performers - especially Mona the acrobat who finds him in the Hall of Mirrors. This Andy - rearranged as Dany - grows in the fertile soil of the carnival, becoming a different sort of man. Growing up. The other takes up with one of those girls, getting up ton who-knows-what in the sand dunes ands setting the rumour mills whirring. Growing up.

Flitting back and forth between the carnival and Andy's home, we see and can compare the two men/ boys, as well as learning about Andy's parents who had already grown chilly with, distant from one another. It's never clear why but there are flashbacks to their attempts to conceive and strange events around that, as well as hints of myth - Irish as well as classical. Indeed the whole book is suffused with a mythological atmosphere, drawing on Milton and abounding in symbols such as hawthorn trees, mounds, changelings and, of course, all those mirrors, which are another central theme.

In a sense the history of the carnival is a jagged, mirrored, shattered history, touching on emigration from Ireland to America, the development of the moving picture - an improvement on the mirror, surely? - and the encroachment of the modern world on the ancient. The carnival is at the centre of all this, but for how long? Whatever the origin of the carnies, they can't reproduce and in the end they succumb to the Fatigue. So they have traditionally snatched children, unwanted children from families struggling to support them, and taken them into the business, as it were. But this is now barred by modern watchfulness. And with an ancient enemy waking, how long can the carnival carry on?

All of this is gradually teased out alongside Andy's story, the picture slowly forming as though a mirror were being cleaned. Then we come to the final part of the book which suddenly shifts into something much more like horror. And that was where, I felt, the delicate way that Jordan had built his structure and slipped it into the gaps of our world, suddenly came adrift. The carnival had been painted as something elusive, something you'd come across by accident and forget afterwards. Then, suddenly, it can be tracked on the Internet, and events there take a turn that can't, surely, be forgotten - though we're not told, in the end, exactly what does happen. Indeed a crucial scene is almost completely missing: Andy plays a key role in events but, a role he seems to have been preparing for right through the book but - unless I've missed something - we never learn exactly what he does.

I debated with myself whether this actually matters. Andy's role in things is signposted and by the time we reach that point, we know what to expect of him. Isn't that enough? I couldn't decide in the end whether this is very clever of Jordan or simply annoying. Perhaps it depends what genre you think you're reading: the ending is possibly more in keeping with the early, allusive part of the book than the later parts. I'm just not sure.

Overall, then, a fascinating if rather frustrating book. Perhaps the mirror metaphor is appropriate here, too? Which is the reflection - and which the reality?