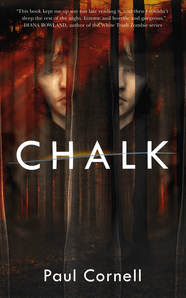 This was one of those rare books that stopped me in my tracks. At times not an easy read, I felt it spoke to me, making the story involving, in places painful, but above all, personal.

I should explain that at school in the late 70s/ early 80s I was bullied quite a bit (not as badly as Andrew in this book though!) I was a bit swotty and not a mixer, so within a few pages, I identified strongly with Andrew Waggoner.

He's an ordinary boy for the time: into Doctor Who, not sporty, a bit shy, trying to avoid the school bullies, with mixed success.

Then one evening - something happens. I was frankly gobsmacked by the place that Cornell goes to at this point. I won't give away what happens but it's no exaggeration to say everything changes for Andrew. The book really begins to fly at this point and describes what happens to him over the next year.

It's a taut, claustrophobic story that drops hints of a haunted landscape, of reservoirs of power and above all, explores a deep, pent-up urge for revenge, denied over centuries until fertilised by blood, rage and fear. Andrew seem to have become the vessel for that revenge - which also promises to pay his enemies back for what they did. The chosen tool is a second Andrew - always referred to simply as "Waggoner" - a creature who, or which, has an epiphany at the old hillfort and sets in motion a plan...

We're never quite sure - nor, I think, meant to be - whether Waggoner is "real" (and some kind of supernatural presence) or a projection of Andrew's rage. Waggoner firmly denies that he comes from Andrew's mind, yet others perceive them as one. Waggoner seems though to have motivations and a confidence that are very distinct form Andrew's. Indeed, they struggle and disagree, and this tension animates much of the story as, in that year, friendships are made and broken, pretended to and refused: as Andrew, very tentatively, becomes close to a girl (Waggoner warns him off): but above all, as the chalk patterns of vengeance spiral round and begin to grip the school.

I loved - if you can use the word for such a dark book - the way Cornell blends the different realities in this story. There is the world of the almost-adults in the school. Awful acts of bullying take place only a hairsbreadth away from adults who surely must know about them, surely ought to intervene, but don't - the curious world of the adults, with their own problems, of money, ageing and memories - seems quite separate place, even if it occupies the same space. The two run in parallel, rarely intersecting - so for example Andrew can't report what happened to him, the "obvious" way out of his nightmare. I wonder whether the need, the desire, to read (and to write) fantasy taps into this double universe? We all know in our bones that there isn't one world but many, and exploring that through fantasy is less painful than facing it directly? It's as if everyone has fallen into another kingdom with different rules. In a sense that seems no more unlikely than an ancient tribe living behind a thin veil in a real hillfort... or a twin created for a dark and secret purpose. I could relate to this.

But it's not just Cornell's themes that resonated with me in this book. More than in anything else by him that I've read, he describes the world as I saw it at that same time.

The white line (you'll know it when you get to it!).

Andrew anxiously runs through the current pop hits, desperate not to betray himself by liking, even by knowing about, the wrong things. Or, forced to pass an initiation test, he fails on banal questions about football managers.

In other places he rages about not following sport or music because it's what the other kids are into. In a third rate private school out on the chalk of Wiltshire, deviance is severely punished by the other kids - but a certain sort of boy or girl wants to be deviant.

But what if you could punish them? I recognised this thirst for revenge too - and part of me cheered Waggoner on as he delivers it (in gruesome detail. Really. Gruesome.) Yet my unease also grew. It seems more and more likely there will be collateral damage, that innocents will be drawn in... It's an electrifying read, involving, harrowing and utterly compulsive.

I'd warn the reader that you may find - well I found - bits of this book difficult. There were times I had to put it down and breathe calmly - but I could never put it down for long. It is, simply, the best - and most powerful - thing of Cornell's I've ever read.  Buy it, read it.