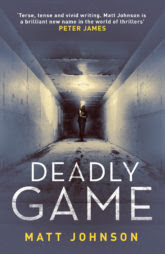 I'm grateful to Orenda books for a review copy.

First, full disclosure. I reviewed Johnson's first book, Wicked Game, on a blogtour last year and my review is quoted inside this one (Yay! Fame! Fortune! Prizes...) I also attended the launch of that book at which the author spoke very movingly of his experiences in the Met Police and the PTSD which was part of his reason for writing these books.

I'm also reviewing this on 22 Match 2017, the day of a terrorist attack in Westminster close to where I work, and I spent this afternoon watching the incredibly brave and professional police managing the situation.

So I may seem a teensy bit biased about this book, which I enjoyed greatly, but I'll try not to be.

In fact, it's actually quite a hard book to write about. Johnson's writing isn't perfect but it has something, a distinctive voice, a blend of the matter of fact and the down right incredible, which makes it compulsively readable.

I'll say a little bit more about both these aspects in a moment. First, in case you haven't read Wicked Game, the setup.

Inspector Robert Finlay is a bit of a misfit. Ex SAS, then Royal Protection, he had just moved into uniformed policing - with a lot to learn - when he got caught up in a terrorist campaign that seemed to target him and a group of his ex-Regiment comrades. Johnson pursued this thrillery concept with zest, having Finlay dust off a cache of weapons and mix it with the bad guys, including, at one stage, taking pot shots at SO19, the Met's armed response specialists. (Bit awkward in the canteen afterwards, obviously).

Things got straightened out and blame for the killings laid at the door of Monoghan, an MI5 maverick. In Deadly Game, the Met are trying to find a role for an Inspector who's now shunned by his uniform colleagues as a bullet magnet but isn't qualified to be a detective. In the end he's attached to a human trafficking taskforce. (Johnson refers throughout to the trafficked women as 'slaves' which is either a bit quaintly old-fashioned or plain non-PC: take your pick. See also references to a WPC, a top firearms officer, as a 'girl').

At the same time, he has business remaining with MI5 over the Monaghan debacle, and his liaison there also tries to use him to get a line on an ex SAS man who's just published his memoirs. Involvement in that inevitably leads Finlay into deep trouble, in a fast paced adventure blending conspiracy theories, a 'state of the world' sub-plot reminiscent of a Richard Hannay story, and an expose of the human trafficking racket.

It's all unbearably tense, with what I'm coming to see as Johnson's characteristic blend of deeply credible detail (weapons, procedures, tactics, inter-Service relationships, personalities) with some frankly fantastic twists of fate, actions, and events. If one wanted to criticise, the latter might be a sufficient excuse, although I think that would be unfair as they don't in any way hamper enjoyment of the story. I'll only give one example - because I don't want to spoil the story - which is when a key fact becomes known because, at just the right moment, one of the trafficked women escapes and is picked up by the police.

If you want every last detail of your books believable, things like this - and there are more - may be a problem for you. Yet I find myself not particularly bothered about these things. Why? Is it because I'm biased (see above)?

I don't think so. I think the reason is rather different and goes to the heart of the appeal of Johnson's writing.

First, I've learned to be wary of saying 'X is just not believable'. It seems to be a fact in today's world that the unbelievable happens more often than you would think, and that a writer striving simply for believability might actually have to tone down the real world rather to write something convincing - and where's the fun in that?

Secondly, Johnson is, simply, a born storyteller. He does it all with such verve, switching between Finlay's first person narration and as much third-person following other points of view as is needed to paint the background -  but without ever getting bogged down. In so doing we are introduced to facts Finlay doesn't know (and never learns), characters he hardly meets (but who populate the pages of the book like figures in a soap opera, suggesting there's a whole world out there beyond what we're told) and events that took place long before. It all creates such a convincing impression of depths, of a teeming community of spies, police and crooks, that you can - well I could - forgive the odd apparently far fetched plot feature.

Finally - Johnson has been there. He won't, obviously, talk about stuff he shouldn't, but perhaps we can take on trust that, yes, the unlikely does happen, cases are moved on by strokes of luck, and both criminals and spooks do indulge in baroque extremes of behaviour from time to time (I'm looking at you, MI6 man Howard Green...)

So, to sum up: this isn't a slick book, it has a raw quality such that the unlikely events described actually seem to make the story more credible. Again I go back to John Buchan and his 'shockers'. They weren't elevated literary writing perhaps but they were - and are - cracking good stories, still readable after a hundred years or more. For sheer readability and entertainment I'd see Johnson in that tradition. But unlike Buchan, at the same time, he's exploring Finlay's slow recovery from PTSD - not at all a quick or easy theme, but a journey I'm looking forward to him continuing in future books.

To sum up even more: READ THIS BOOK!