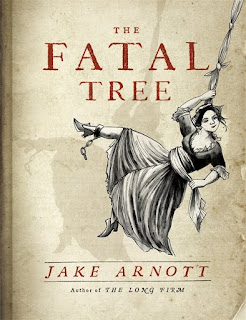 You need to take care if you visit Romeville, especially if you're a chub. Believe the patter from one of the canting-crew - cove or mort - and you may find you're just a cull. Watch out especially in darkmans. Maybe you're best staying in Daisyville after all...

This book transports the reader to the heart of 18th century London, the town of posture-molls and lully-prigs, a great roistering stink of a place fueled by gin where the flat and flash worlds coexist and everyone has secrets.

It's the story of Elizabeth Lyon, "Edgeworth Bess" and her lover, accomplice, betrayer, Jack Sheppard. Lyon is ruined by her master's daughter and cast off to make her living in the "academies" and "vaulting-schools" of the Hundred of Drury: Sheppard is a bored apprentice who takes to burglary and jailbreaking like a native. Lyon and Sheppard were real people: William Archer, aspiring journalist in Grub Street by day and client of Mother Clap's molly-house by night, was not but stands for a class of gay men condemned by the harsh (injustice) of the time. (Arnott names some of them in a postscript. Gabriel Lawrence. William Griffin. Thomas Wright.) The Triple Tree awaits, and many will dance the Tyburn jig by the end of this tale.

The whole scene is presided over by Jonathan Wild, thief-taker ("prig-napper") and thief-master, whose own fate is bound up with those of Lyon, Sheppard and Archer. He, also, was real: after his fall, Defoe wrote his life story.

Arnott packs an extraordinary amount into a relatively short book. There's the vigour and bite of a London ("Romeville") where everyone is, seemingly, on the make, not only the sharks in Exchange Alley who drive the South Sea Bubble or Wild himself but also a Lord Chancellor who's embezzling from the Treasury and escapes with a fine. The rich may get off with a light sentence but the poor receive no mercy (isn't that always true?) He also shows us the quest, among the coves and the morts, for instant fame, in a world where the scribes of Grub Street (former Grape Street, former Grope-c**t Lane) can tell a tale of jailbreak, ruin and repentence and gather enormous crowds to witness that final journey along what's now Oxford Street to the Tree.

At one point a young girl in jail confesses to Lyons that she wants to be like her, Like Edgeworth Bess: she wants fame and respect. She wants to be a celebrity. Three hundred years ago, there is a new, instant means to earn this, and plenty are up for it - as we realise from the very form of the novel, which is the entwined confessions of Lyon and Archer.

Never less than vivid, this was at times a slow read (I had to keep looking up the flash-talk in Arnott's helpful glossary, and perhaps at times it is a little rich in Lyons' sections of the story) but it really grew on me. Behind the swagger and bravado there is a deeper story here - a story of love and of heartbreak, of people meeting, falling for each other - parted. A sad story. (Isn't that always true?)

Through it all, some truths emerge, I think - about ambition, about corruption, above all about that great Wen, both devourer and playground of the young, London, whose character doesn't change, even if overlain for a time by the hypocrisy of a Wild or a Society for the Reformation of Manners. Bulldoze or bomb the streets, pour the concrete, the place remains a flash-ken and long may it be so.