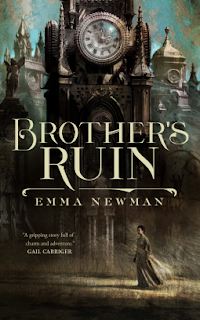 I'm grateful to the publisher for an advance e-copy via NetGalley.

I hadn't heard the term "gaslight fantasy" before but I think it fills a definite need, describing fantasy books set an an alt-Victorian world but which aren't in that genre full of clockwork, goggles and brass - you know the one - and most importantly, which may involve MAGIC.

In what we're promised is the first of a series, Newman has reimagined the 19th century as undergoing an Industrial Revolution driven by magic, rather than science, with the key group being the mages of the Royal Society of the Esoteric Arts. It's a crime to keep magical ability secret - if you do, enforcers will drag you away to who knows what fate. Rather it must be developed and used for the good of the Empire.

But equally, anyone falsely claiming magical powers will also suffer penalties. A dilemma then...

We don't see much of the wider picture in this book. Rather it's focussed on a particular family and the effect on them of these rules. Sister and brother Charlotte and Archie Gunn are close. He's a sickly boy: she secretly earns money to support the family, much of it poured away on Archie's studies. If either were tested by the Royal Society and passed, the family could come into money. But if they failed, it would mean ruin.

So it's concerning when there's a rap on the door one day, and the Society's agents announce that Archie, who is the weaker of the two at magic, is to be tested...

Newman tells the story through the eyes of Charlotte, a determined and clear headed young woman, who's pretty much holding the family together. She hopes she can manage the Royal Society's testers. She's not so sanguine about the debt collector who's been hanging around, apparently planning to drag her father off to a sinister address in Whitechapel. Perhaps if she investigates the place she'll find a way...?

This is a short book with a relatively straightforward story - although Newman drops a few surprises too - and it runs at a breakneck pace once the setting has been established. There are some nice touches of characterisation, such as the genteel racism of Mrs Gunn when, to Charlotte's horror, she asks brown skinned Master Judicant that fatal question, yes, but where are you really from?

We also see Charlotte's internal turmoil - 'Once she got upset about something, it pummelled her insides like a demon trapped within her...' - making her human and vulnerable: just being a hero in a novel doesn't make you immune to anxiety attacks.

There are some very nice bits of language - 'a bold red coat that looked like it cost more than their coal bill for a cold winter', 'she wouldn't have been surprised if someone told her he was actually an artist's sculpture made flesh' (Charlotte develops a VERY close interest in one of the mages from the Society) as well as calls to action - 'It was time for this rude young woman to make a difference'.

The book ends on a distinctly promising note 'I need you to be ready for adventure' SURELY promising more with these characters and this setting? I am ready, Ms Newman, I am - bring it on!