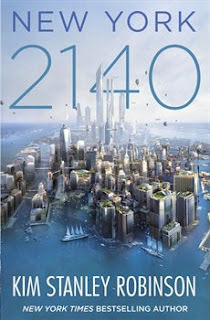 "The glass is falling hour by hour, the glass will fall forever"

"But if you break the bloody glass you won’t hold up the weather."

Despite the efforts of well connected denialists to break the bloody glass, the weather rolls on, unstoppable. And authors are now addressing the reality of climate change (perhaps only fiction can convey the reality of this inconvenient truth). A couple of years ago, Adam Nevill used its horror as both a background for and an essential strand of Lost Girl. Last year,  Jonathan Strahan gave us dispatches from the near future in Drowned Worlds.

Now, Kim Stanley Robinson presents a lyrical, beautiful yet chilling warning from 2140, where New York is up to its armpits in water and hustling hard to survive. It is an ambitious book, making real that old cliche that in this book, the city itself is the most important character.

But not the only important one. Robinson employs a device that must have made the book a nightmare to write, telling the story through multiple viewpoints which don't overlap or run in parallel but pick up from one another sequentially.  So we hear from "Mutt and Jeff", two hard up quants living in a garden who plot reform of the world's financial laws. There's Gen Octaviasdottir, the police Inspector who runs much of south Manhattan. Franklin, a trader and deviser of an all-important index which is powering an investment bubble. Vlade, building manager for the old Met Life skyscraper, now standing 50 feet deep in water and converted to provide accomodation, power and - via its farm deck - food. Charlotte Armstrong, social worker and leader of the Met Life co-op. Stefan and Roberto, two children of the waves who have a line in treasure hunting through the drowned streets. Amelia Black, cloud TV star who pilots an airship and films her attempts to save threatened species from the waves.

And, yes, the city speaks through the voice of "a citizen" whose account is the only one to really break the chain of narrative as it discourses on New York history (some of it, to us, still in the future). Sometimes this is immediately relevant, sometimes you only see the point 50 pages on.

And everywhere there are quotes: quotes from New Yorkers, quotes from those experiencing the city for the first time, quotes about famous citizens, geology, history... an awesome amount of research must have gone into this book but it's worn lightly, it all serves to set out the character of that extraordinary city and portray what it might come to after another 120 years of rising waters.

From the waves which have drowned half the land, leaving the inhabitants living in the taller buildings, commuting by boat, trying to house the myriad of refugees arriving from even less fortunate places, running rackets, politicing, trading: being New York.

But also under siege from the uptown gentrifiers who like what's been made of the edgy intertidal and want in. The attempts of Charlotte and her allies to fend off one such attempt - and perhaps, to take back a little control from the world of finance and speculation - form most of the book's plot, together with the fate that befalls Mutt and Jeff when they offend those same gods of finance. It's almost beside the point, though, as the main action here is the city's endurance, deep rooted in its past, of all that Man (-made climate change) can throw at it. It is, as I said above, a beautiful book, Robinson playing with the paradox of a global disaster that still brings new possibilities, that draws out the best - and worst - in us. His characters defy not only the elements but the speculators, crooked financiers, a Mayor who sides with the rich. if it was a book about London I'd call it the Blitz spirit: perhaps for New York it's the 9/11 spirit? I don't know.

It is, in all ways, an immersive book. It's sweeping in scope - as Robinson points out many times, his city is a microcosm of the world, it shouldn't be taken as typical but it stands for many places and enables him to tell the story of the melting Antarctic and the shocks that it causes, as well as of financial crisis upon financial crisis in which the people have to bail out reckless capital and then suffer for having done it. There's perhaps an implicit comparison between those two manmade system-disasters. It's a great long chunky doorstop of a book, not a quick read but a read that rewards you with multiple views of the same thing, with many incidents and episodes that shed light on the characters, all told in subtly different registers suiting their protagonists (for example, the mildly comedic episodes featuring Amelia Black or the self-absorbed thoughts of Franklin Garr).

I could, really, waffle on all night about why this book is brilliant but really I'd do a poor job at conveying its genius compared with your just reading it so. I'll leave you with an extract:


Then comes September and the sun tilts to the south. Yes, autumn in New York: the great song of the city and the great season. Not just for the relief from the brutal extremes of the winter and the summer, but for that glorious slant of the light, that feeling that in certain moments lances in on that tilt--that you had been thinking you were living in a room and suddenly with a view between buildings out to the rivers, a dappled sky overhead, you are struck by the fact that you live on the side of a planet--that the great city is also a great bay on a great world. In those golden moments even the most hard-bitten citizen, the most oblivious urban creature, perhaps only pausing for a light to turn green, will be pierced by that light and take a deep breath and see the place as if for the first time, and feel, briefly but deeply, what it means to live in a place so strange and gorgeous.