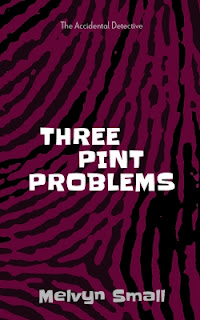 Ever since Conan Doyle stopped writing Sherlock Holmes stories (in fact, probably before...) the character has been reworked, imitated, reinvented, referenced and pastiched. Melvyn Small's take is a pleasingly different example of this - a Holmes of the North East, in fact Middlesboro, firmly living in the 21st century (one of the stories includes a sizeable part for BBC Local Radio). This is a version of Holmes that gets us away from gaslights, Hansoms, cobblestones and deerstalkers.

(Sort of. Small does pack in a fair few references to the originals, just to prove he knows what he's about - 'Sherlock ever investigated a case that included some sort of hound? I dunno, maybe one terrorising a bunch of posh twats...'; a mention of a horse running in the 'Beryl Coronet'; the 'Baker Street Kitchen' is a cafe and 'The Twisted Lip' a pub, and of course there are namechecks for DI Barry Lestrade and even Col Sebastian Moran - who Holmes was lucky to escape from alive. Indeed the title of the first story is a reference canonical Holmes himself drops in the course of A Scandal in Bohemia (the context being the universal human tendency, in case of fire, to save the most precious thing - a point relevant to this story). There are many more references which I won't spoil - you can have fun hunting them out yourself!)

The Darlington Substitution isn't, at least not apparently, a case of murder or theft but - like many of the originals - more of a puzzle. I won't spoil the story by saying just what has happened, but it's an oddity, a surprise, that sets Holmes' antennae twitching. But he lacks data and, as ever, John Watson isn't best placed to supply them. Indeed, being preoccupied with selling copies of his memoirs, he doesn't pay a great deal of attention to Holmes's concerns. (The sections detailing signings in bleak branches of WH Smith are written with feeling!)

Murder on the Teesside Princess is more of a locked room mystery, Holmes on the scene when a night to remember aboard a floating restaurant turns bad. A complication is that Holmes has just been arrested, Lestrade having come aboard for the purpose, after an altercation with another passenger. That signals a darker side of Holmes I think - indeed it's becoming clear that he's sometimes on the wrong side of the law. That made me think of how fun the Conan Doyle stories Holmes and Watson get away with so much because of what these days we'd describe as their privilege. No such latitude exists in Small's version, and it's very lucky for Holmes that he's able - without apparent effort - to solve a fiendish crime, alive with misdirection and concealment, handing Lestrade his villain on a plate, and the earlier unpleasantness does, indeed, fade away.

It was in the course of reading this story that I started noticing an elegiac note to Watson't narration, a foreshadowing of Holmes' death something I trust won't be arriving too soon as I've just discovered this series!

The Devil's Advocate continues the darker vein of these stories by giving us Holmes' account of his jury service some decades earlier (bit naughty of him to talk outside the jury room). It's a mastery demonstration of Holmes' methods, but also of the morality behind them. The greatest revelations, in the end, are not "how" but "why". We see Holmes' earlier life depicted in a way that was actually rather moving. That depiction did, though, show that Holmes has his own agendas and that he if far form infallible.

The final story, The Riverside Thriller, is rather lighter in tone, Holmes getting his teeth into a knotty problem against the clock. There has been a murder at the football stadium and the match is due to begin. Can our hero crack the case before kick-off? An ingenious mystery here, classic Holmes, and great fun.

I loved this version of Holmes. Once you become used to the central characters, and especially to them NOT addressing each other in the slightly stuffy manner of the originals, the stories rattle along. There is some neat writing in places "...hoping I could transform his change of mood into a change of mind..." and use of (I think) real locations in and around Darlington and Middlesborough which slightly passed me by, not knowing the area (but then I don't know Victorian London either?)

For more information, see the Indipenned website here. You can buy the book on Amazon here.