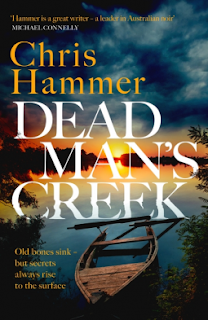 Dead Man's Creek
Chris Hammer
Wildfire (Headline), 5 January 2023
Available as: HB, 496pp,  audio, e
Source: Advance copy
ISBN(HB): 9781472295668
I'm grateful to Wildfire for providing me with an e-copy of Dead Man's Creek to consider for review.
The partnership of Australian detectives Nell Buchanan and Ivan Lucic, first seen in Opal Country (which is, like Dead Man's Creek, part of a tapestry of stories featuring Buchanan, Lucic and journalist Martin Scarsden) returns here. but this book is really Nell's.
Called in to investigate the discovery of a skeleton when a river dam is destroyed by environmentalists, the two seem to be wasting their time on ancient history, on the coldest of cases. Can there be some ulterior motive for Ivan's interest? If there is, it doesn't last long as he leaves Nell to sort things out and disappears back to the city.
She's not so bothered. Tulong is her hometown, and while sh'e not exactly on good terms with her family - her mother didn't want her facing the dangers of police work - it's familiar ground and she's running the show. Yes, there may be problems with the conspiracy-theory touting "cookers" living out in the forest, but Nell can handle herself, can't she?
But then another body turns up, and this one is less straightforward...
Interleaved with the present day story are the accounts of a young boy living in the forest during the Second World War, while his father is away fighting, and of a young woman living in Tulong in the mid 70s. These very different accounts showcase Hammer's ability to inhabit character - both the lonely, frightened but self-sufficient boy and the young woman on the threshold of life and freedom, experiencing love and lust for the first time.
But behind these two another, vaster character looms - the Barmah-Millewa forest, a vast tract of land occupied by the mighty redeem trees, drawing its sustenance from the Murray River. The first is home to all sorts of renegades and escapees: wartime deserters, dropouts and hippies, criminals, and even more sinister elements as well as abundant plant and bird life. A sad aspect of the story its its consumption by settlers for wood and charcoal, and their choking off the precious waters, leaving the trees dried out and dying. (I cheered on the destruction of the "regulator", which keeps the river water from the forest).
The forest is, though, still alive, vital and active in this story, not just a location for events but a determinant of them - as ever with Hammer's books, Alksander Potočnik's map helps one to follow what's going on. Hammer's descriptions of a child's time in the forest, or of Nell exploring the flooded wonderland in search of a rumoured shack on an island, really evoke the glory and mystery of a primeval landscape.
There's a lot packed into Dead Man's Creek, the three narratives evolving slowly and satisfyingly before the mystery is even stated. Nell is able to go about her job - at least to begin with - fairly slowly and steadily, untangling wartime records, accounts from local papers and forensic evidence. Meantime, the detail and atmosphere build, the hints of small town enmities and generational feuds which inevitably touch on her own family and background, raising ethical questions of how closely she should actually be involve din the investigation.
That aspect - and the menace of Internal Affairs - is thought more distant than in some of Hammer's other books. Other threats abound though, with a birdwatcher having recently vanished (oddly, nobody seems very bothered by that) and Nell's landlord taking against her because of her family.
A gloriously evocative story as well as a knife-sharp crime novel, Dead Man's Creek shows Hammer's writing at its excellent best, delivering a truly empathic account of some very hard lives as well as tension, mystery and a message about our relationship with and stewardship of the land.
STRONGLY recommended.
For more information about Dead Man's Creek, see the publisher's website here.
Email ThisBlogThis!Share to TwitterShare to FacebookShare to Pinterest
Labels: 2023, Australia, crime, family, Thriller