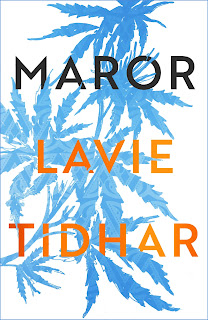 Maror
Lavie Tidhar
Head of Zeus, 4 August 2022
Available as: HB, 554pp, e
Source: Advance e-copy, purchased HB
ISBN: 9781838931353
I'm grateful to the publisher for an advance e-copy of Maror via NetGalley.
Maror is kind of hard to describe - it contains so much, covers so much ground and introduces so many characters, that a review risks missing the wood for the trees.
A lengthy book, in which Tidhar seems to enjoy the opportunity to swoop and circle his themes, it's a study of modern Israel, dramatised and explored using the lives of a varied bunch of characters. If you've read Tidhar's By Force Alone and The Hood, described as the "anti-Matter of Britain", which deconstruct the heroic myths of, especially, England, you might see some similarities in Maror although the latter is strictly realist - no magic, and cops rather than warriors (though drugs do feature here as in those books. There are also some allusions to Tidhar's SF - for example, I spotted a reference to the cover of his Central Station short story collection).
What we have is a book written in eighteen (shortish) parts which jump around different locations in Isreal, Lebanon, and further afield, mostly moving forward in time but occasionally jumping back to show earlier events. The almost-common theme is Cohen, policeman, crime boss, spy, husband, father, grandfather and so much more. It becomes clear early on that he is corrupt, indeed we see how this comes about, but Tidhar is quite shifty about what this amounts to. Is it a necessary corruption, Cohen doing the things that can't be seen to have official sanction? Or is he just on the make?
I suspect the truth is somewhere in between, with the consequences you'd expect: we see a murder enquiry deliberately botched to pin the blame on an innocent man, a journalist pressured to suppress inconvenient truths about dodgy land deals in the West Bank, and, as I have said, drug dealing and gangsterism on a grand scale, exploiting (or even driving) Israel's conflict in Lebanon. That trade also takes us to South America where drugs, mercenaries and crime bosses occupy a shifty, overlapping space. (There are many deaths in this book).
Alongside the cynical counter-history, Tidhar also gives a vivid portrayal of Israel - weaving in three decades of music with a sensual portrayal of young people living their lives (a fascinating tapestry, that, of kibbutzniks, youth workers, journalists, rookie cops and many others), of the food, the bewildering contrasts between different corners of what is a very small country. Political events make an impression,  with hopes for peace undercut by repeated incursions into Lebanon and, eventually, by assassination and by a shift in the mood of the politics. There is a sense of decaying idealism, but also a recognition of wrongs buried in the founding history of the land: Arab villages that are no more, bodies buried on the beach. Cohen knows where the bodies are buried,  he may have just some of them there himself, but best not talk about that...
Maror is a terrific read, well-observed, absorbing, deploying a vast number of characters and allowing them to come to life across years of time and miles of distance, some patterns recurring and others broken. It is a book with great humanity, showing people living their lives around great - and sometimes terrible - events.
Strongly recommended.
For more information about Maror, see the author's blog here.