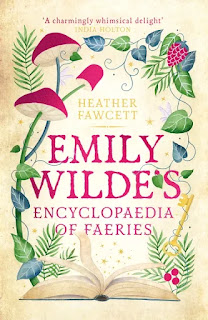 Emily Wilde's Encyclopaedia of Faeries
Heather Fawcett
Orbit, 19 January 2023
Available as: HB, 336 pp, audio, e
Source: Advance copy
ISBN(HB): 9780356519128
I'm grateful to Nazia at Orbit for sending me a copy of Emily Wilde's Encyclopaedia of Faeries to consider for review, and to Tracy at Compulsive Readers for inviting me to join the book's blogtour.
Emily Wilde's Encyclopaedia of Faeries is a breath of fresh air, blending real-world problems - awkward colleagues in academia irritate each other while jostling for recognition with a key conference coming; both are determined that, no, they DON'T fancy each other - with a whole other-worldly aspect involving a newly discovered and powerful variety of faery.
The story takes place in what I think based on technology (there are no dates) is an early 20th century Europe, with two key differences from our own world. First, it's much less patriarchal - Emily as a single woman is a leading researcher in "dryadology", the study of fae. Secondly, said fae are an established and accepted aspect of the world, much studied if ill-understood. They do not seem to be particularly menacing for the most part, unless you rub them up the wrong way or go off into the wilds to pursue the more exotic sorts... as Emily is wont to do.
Given this is a world without air travel, mobile phones or the Internet, such journeys tend to involve a good deal of tiresome travel by steamship, dog-sled and horse (think heroic age of Arctic exploration, perhaps) so they are also beset with a fair amount of danger and trouble. For the enterprising academic, this can be ameliorated by the judicious employment of students to do the legwork - though this is something Emily prefers to avoid.
As the story opens, we meet Emily aboard ship, heading for a remote island off the Norwegian coast where she hopes to complete the fieldwork for her planned Encyclopaedia. However she's about to run into problems caused both by her lack of practicality and her tendency to misread people...
I just adored Emily. A spiky, awkward woman, she prefers to spend an evening revising a draft article - rather than networking with the villagers at the inn. Consequently she's continually wrong-footed in little matters like being overcharged for provisions, understanding who has the info she needs, and having enough firewood chopped to keep her borrowed shack warm in the Arctic winter.
On the other hand she knows her subject inside out, and she absolutely does not cut corners, make up research or nick other people's ideas, unlike her rather more indolent colleague Wendell Bambleby. He turns up, unwelcome, midway into the story, accompanied by a flock of students to carry his bags, and commences taking over her research.
The tension between the two is delightful. Emily loathes Wendell, but he clearly has a bit of a thing for her and, as the story proceeds, we may begin to wonder of that isn't mutual - if deeply disguised. There are all kinds of seething tensions going on here as the two colleagues struggle to understand the plight of the villagers, preyed on by a particularly nasty sort of fae, without offending either the locals OR the supernatural visitors and just making things worse.
They do get worse, though, and Emily rapidly gets in deeper and deeper than an academic ought with her research subject. Can scientific objectivity, the violent passions of the fae, and Wendell's need for academic recognition all coexist? Or will Emily have to give up more than she can bear after she inadvertently puts on a shadow ring?
Funny, entrancing, intricate and sharp, this was a great read and Emily herself is I think bound to be a  wonderful central character in what I hope will be a long-running series.
I would recommend.
For more information about Emily Wilde's Encyclopaedia of Faeries, see the publisher's website here - and of course the other stops on the blogtour which you can see listed on the poster below.
You can buy Emily Wilde's Encyclopaedia of Faeries from your local high street bookshop or online from Bookshop UK, Hive Books, Blackwell's, Foyle's, WH Smith, Waterstones or Amazon. 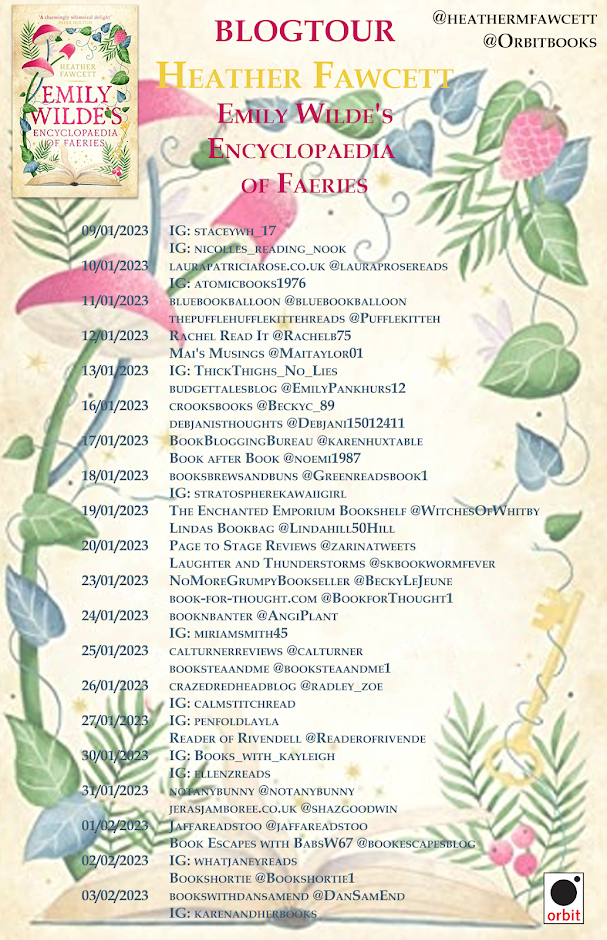