#Review - How to Sell a Haunted House by Grady Hendrix 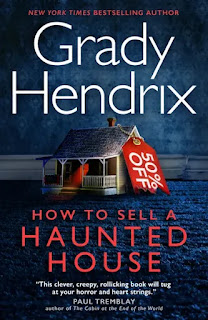 How to Sell a Haunted House
Grady Hendrix
Titan Books, 17 January 2023
Available as: HB, 400pp, e
Source: Advance copy
ISBN (HB): 9781803360539
I'm grateful to Titan Books for an advance copy of How to Sell a Haunted House via Netgalley to consider for review.
More Grady Hendrix is a Good Thing - these books always represent thoughtful horror, alive to the tropes and conventions, indeed often rather slyly commenting on them, but going A LOT further than that.
In How to Sell a Haunted House, we are back in Charleston, when Louise, a designer living and working in California, is called home after the horrific deaths of her parents. Her no-use brother Mark, who she's always rather pitied and despised, has appointed himself to manage all the arrangements but Louise just KNOWS he wan't be able to cope. And that's before strange things start happening at the old family house...
How to Sell a Haunted House is a book that works on several different levels, much of the fun being how those levels interact and contradict.
At the most basic, there are issues between Louise and Mark. A death in the family is apt to expose family fractures: it can't but, because by definition, things and situations are left unresolved forever - and grief and fear of the future can be articulated as anger and regret. We certainly get that here. The book, written from Louise's perspective, dwells on her resentment that while she is the good girl, the hard working and practical one who has sacrificed, Mark has coasted through life, taking advantage of his parents - and now wants to sell their house as soon as he can and enjoy the money. Rather cleverly, Hendrix waits to let Mark have his say and give his side of things - so by then what we hear comes as rather a shock.
It's even more of a shock because at that stage, strange and scary events in the empty house (a house filled with home made puppets!) are in full swing. Mark's and Louise's understanding, and interpretations of what is going are different, reflecting their by then well established character differences, and so the emerging supernatural threat does not bring them together in solidarity. Rather, it drives them further apart. Both family discord and gathering horrors are very well done - no spoilers though! - and Hendrix consistently wrongfooted me about what was going to happen next. It's a very particular mix of implied threat and full on, physical horror. (CW: readers may want to be aware that we do see some rather gory events - be careful if you're squeamish).
So - family issues, Something Nasty in the Empty House - but there's more besides. There is, of course, a mystery to be solved before Louise and Mark will have any chance of sorting the problems, indeed of surviving at all. It seems their family isn't quite what they thought, and the presence of a large number of cousins and aunts obscures that more than casting light on it. Again, everyone has different, and skewed, points of view but these need to be brought together to find the answer. That was rather skilfully reflected in the number of times that I thought, ah, they've spoken to X, X will know what's up and how to fix it - but X never did (even if some of the scenes of failure are rather hilarious).
It's that social, cooperative angle that always makes me enjoy Hendrix's books - there may be objective, supernatural horror here but it's entwined with real, believable family dynamics and psychology. Nothing's going to be solved by waving a cross around or drawing a circle of protection. You have to go back to the roots of the thing, but how can that work when the people who really know about it have just died?
Great fun, scary, well-paced and true to life (and death). Don't miss this one.
For more details about How to Sell a Haunted House, see the publisher's website here.