#Review - The Flowering by Alison Littlewood 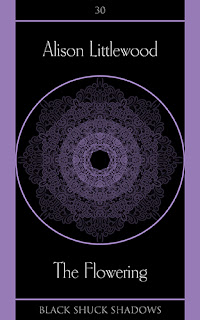 The Flowering
Alison Littlewood
Black Shuck Books, 24 November 2022
Available as: PB, 148pp audio, e
Source: Bought
ISBN(PB): 9781913038960
The Flowering is a collection of six short stories from Alison Littlewood, unconnected in setting or character but linked in that they are all horrors set in historical times - there's a whiff of Dickens in places, a dash of MR James perhaps, but overall, an eerie sensibility that is all Littlewood's own.
In the first tale, The Zoetrope, we get a bit of that Jamesian "pleasing terror" as the instrument of the title becomes both the means by which an injustice is brought to light and the tool by which it might be avenged. Exploring the constraints suffered by women in a deeply patriarchal society, the new-fangled gadget perhaps also foreshadows how the tables might be turned.
The Marvellous Talking Machine also centres on a device, albeit one with more of the magical and less of the technological about it. The machine of the title is a travelling exhibit at the Egyptian Hall in Piccadilly, London, a real setting, and again, we see - in a kind of historical Black Mirror way - how an attempt at a transformative technology, long before the days of Siri and Alexa, might go awry.
Meet Me at the Frost Fair has a classic opening, a ghost story being told in the snug sitting-room of a gentleman's club on a foggy London evening. Looking back at memories of strange events some decades back, the narrator might have been wiser not to call to mind things that may, after all, not be wholly done with...
The Ballad Box takes us to the hardscrabble world of Dickensian London where balladeers eke a living from the imagined deeds and fake last words of the celebrity criminals carried out to dance the Tyburn Jig. An atmosphere of sudden death, cynical exploitation and guilt pervades this story. You'll never feel quite the same passing Seven Dials again.
The Winter Tree also has its share of guilt and also shows how class, sex and convention blend to press cruel fates on, especially, women. With a delicate blend of the supernatural and of human cruelty, the effect is subtle and builds in this haunting story.
The Flowering has some similar elements, but also uses a horticultural setting as both an extended metaphor and, indeed, a new language, telling a story of love, betrayal and revenge.
These stories are perfect for a dark winter's evening with the fire lit and the TV firmly off. But you may choose to leave the lamps lit afterwards.
For more information about The Flowering, see the publisher's website here.
Email ThisBlogThis!Share to TwitterShare to FacebookShare to Pinterest
Labels: 2022, historical, Short stories, supernatural