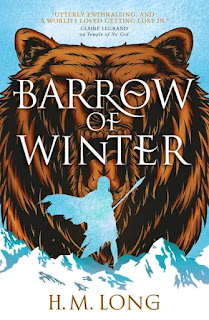 Barrow of Winter (Hall of Smoke 3)
HM Long
Titan Books, 17 January 2023
Available as: PB, 352pp, e, audio
Source: Advance copy
ISBN(PB): 9781803360027
I'm grateful to the publisher for an advance copy of Barrow of Winter via Netgalley, to consider for review.
'Why am I creeping down a tunnel in an abandoned tomb, other than curiosity and the encouragement of an owl that isn't an owl?'
Barrow of Winter returns to HM Long's Hall of Smoke universe (Hall of Smoke, Temple of No God) but it rings some changes.
The first two books focussed largely on Hessa, and saw her grow from a young woman in the first book to a mature warrior-priestess in the second. I had wondered whether the third would therefore show us an ageing Hessa. We don't get that. While Hessa plays a role in this story, she's not central to it - and still more than capable of fighting in battle. But the story mainly follows Thray, Hessa's sort-of niece, now a priestess in her own right but more significantly, a young woman who wants to know more about her own origins and nature.
Some twenty years after the cataclysmic events of the previous book - the deaths of gods and the overthrowing of empires and an old order of things - the land of the Eangen is now at (relative) peace and the worship of the newly ascendent god Thvnder well established. Life is calm for Thray... except when she goes out deliberately hunting deadly beasts just to find out whether she can die. As a descendent of the dead god of winter she may be immortal, but she doesn't want to see those she loves die before time after time, like some of her siblings. She therefore wants to know.
That impulse in Thray to push boundaries is established early on, and she lives up to it throughout the book (oddly reminding me of Hessa in Hall of Smoke). Despite being betrothed to a devoted young warrior and having numerous responsibilities as priestess for her village, it's clearly only a matter of time before Thray will find some reason to head off into the North to learn about her kin and where she came from. The opportunity, when it comes, takes us into whole new realms of Long's fascinating world - a country bound in darkness beneath everlasting winter, one where strange new gods and their priests, and Thray's own kin, the Winterborn, coexist uneasily in a fragile politics already threatened by climate change and hunger for power.
The political turns out to be very personal indeed for Thray. The Winterborn aren't to be trusted, but they possess knowledge and abilities that she needs to make sense of her life. Will she be able to coax those from them without giving up her own identity, her own future? What will the price be?
A novel of becoming, of growth, of loyalty, treason and of discovering what really matters, Barrow of Winter was very enjoyable, very fast-paced and laced with mysteries. Thray is a relatable and interesting protagonist and Long makes this book entertaining and fun in its own right even if you haven'r read the previous ones. For myself, I'd like to have seen more of Hessa, but I appreciate that as High Priestess of a flourishing cult her life is probably too admin-y for a thrilling adventure - she has responsibilities and is old enough to know she shouldn't abandon them unlike Thray does.
Recommended.
For more information about Barrow of Winter, see the publisher's website here.