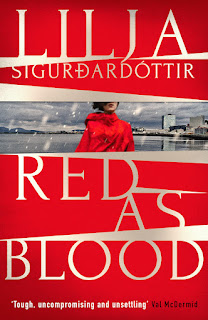 Red as Blood (An Áróra Investigation, 2)
Lilja Sigurdardóttir (trans by Quentiin Bates)
Orenda Books, 13 October 2022
Available as: PB, 300pp, audio, e
Source: Advance copy
ISBN(PB): 9781914585326
I'm grateful to Orenda Books for sending me a copy of Red as Blood to consider for review, and  for inviting me to join the book's blogtour.
Following up Cold as Hell, Red as Blood sees Áróra still in Iceland - in fact she's bought a flat - searching for her missing sister, Ísafold. However, she soon becomes involved in the search for another missing woman, Gudrun, whose husband Flosi returns home one evening to find the kitchen wrecked and a ransom demand on the table.
Áróra's skills at tracing missing money prove to be very useful in what follows, as, working with, Daniel, her will-they, won't-they distraction in the Reykjavík police and his team, she attempts to unravel a most perplexing mystery - one with family, business and potentially, criminal aspects but where it's never clear which is at the root of events.
This was a thoroughly engaging crime novel, Áróra's romantic tension with Daniel palpable. He's introduced as a thoroughly nice guy, a real exception to the rule of the grizzled, burnt out cop, and from what we see of him here, that's truly deserved (see for example the subplot with his neighbour, drag artist Lady Gúgúlú who has a thing about the "hidden people" inhabiting a corner of Daniel's garden forbidding him form mowing it, but whom he protects here).
But there are other tensions too. Daniel is supposed to be investigating Ísafold's disappearance, but that seems to be going nowhere. Is he actually as dependable as he might be? Is meticulous, work-focussed Helena (a member of the team who looks up to Daniel as her mentor but is of a rather different temperament) getting distracted by her casual hook-ups, and losing focus on the enquiry?
The book manages to pack a great deal into a fairly small space. Daniel sets about getting a clear picture of Gudrun and Flosi's lives, soon discovering that with ex-wives, mistresses and step-daughters, not to mention business dealings, it's all a lot more complex than you'd imagine. The unravelling of Gudrun and Flosi's family was especially fascinating - in the sense that a car crash is fascinating. So many levels of misunderstanding and deception are going on here, one of which embroils Helena. As the truth emerges, it's nicely accounted for by the character and background of everyone we meet here - rather than being crowbarred in to fit a plot. There's real depth to them all - plenty of interesting backstory, but more, a sense of them as real people about whom one comes to care.
With hints of wider events and other players at the end, Red as Blood is an excellent middle volume to a trilogy and indeed a fine example of a detective novel. It's rendered ably into English by Quentin Bates who as ever manages both to make the language show that this is taking part in a foreign language while at the same time making the words clear and absorbing
For more information about Red as Blood, see the publisher's website here - and of course the other stops on the blogtour which you can see listed on the poster below.
You can buy Red as Blood from your local high street bookshop or online from Bookshop UK, Hive Books, Blackwell's, Foyle's, WH Smith, Waterstones or Amazon.