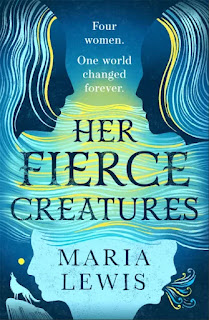 Her Fierce Creatures (Supernatural Sisters)
Maria Lewis
Piatkus, 4 October 2022
Available as: PB, 390pp, e
ISBN(PB): 9780349427263
I'm grateful to Piatkus and especially to Nazia for an advance copy of Her Fierce Creatures to consider for review.
When I read Lewis's first book in the sequence, Who's Afraid?, I was a little wary. Werewolves? But it was soon clear this wasn't your typical UF, introducing Tommi Grayson, who has a foot in both the supernatural and mundane camps. Successive stories followed Tommi's further adventures as well as introducing a succession of women who are members of different supernatural peoples - a sprite, a medium, a banshee - and their world - oppressed by an authority known as the Treize.
Now the time is coming to turn on the Treize and the stakes are suddenly higher. Her Fierce Creatures is Lewis's necessary final volume in the Supernatural Sistersbut, gosh, how difficult this must have been to write! Unlike the previous books it has too maintain the viewpoints of all four women - Tommi herself, Dreckly (the sprite), Caspet (medium) and Sadie (the banshee). While they have appeared in each other's stories before, those were generally minor, walk-on appearances and each had a full book (or more) in which to develop (my favourite of those being Dreckly in The Rose Daughter, living her life through the long 20th century, encountering all manner of prejudice and adversity and coming out on top).
Here, there is more of a team-up with the need to keep track of parallel events taking place around the world, at the same time as tying off stories, romances, rivalries and foes. That inevitably makes Her Fierce Creatures a slightly different type of story - but Lewis delivers a perfect completion to her saga, resisting any temptation to make this one endless kick-ass battle and allowing each woman some space. For me, that really pays off. These are not just characters, they are friends we've come to know, women whose stories and struggles have struck a chord, and they deserve an opportunity to reflect on that as they await the end.
And this isn't just a story of endings, it also contains new beginnings. Sadia is pregnant - VERY pregnant - with the triplets who may be the hope for the supernatural world. And revolutions are, as we know, built on hope. In making one of the story threads here focus on the challenges and rewards of pregnancy and childbirth, Lewis is still I think - even after seven books in this series - saying something important and new here about that experience. I think it a glorious way to end.
For more information about Hew Fierce Creatures, see the publisher's website here.
Email ThisBlogThis!Share to TwitterShare to FacebookShare to Pinterest
Labels: 2022, Maria Lewis, revolution, supernatural, Urban fantasy