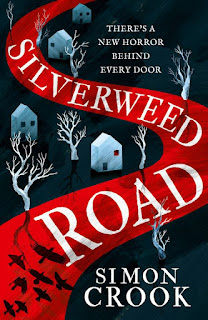 Silverweed Road
Simon Crook
HarperCollins, 29 September 2022
Available as: HB, 336pp, e, audio
Source: Advance e-copy
ISBN(HB): 9780008479930
I'm grateful to the publisher for an advance e-copy of Silverweed Road via NetGalley, to consider for review.
"All that is loved will be lost."
The addresses along Silverweed Road on the fictional Corvid Estate in Kent hide many secrets, many horrors. It's a place you probably wouldn't want to visit, still less move to. I'd imagine living there would be like experiencing, in real life, the entire run of Inside No 9,
Loosely framed as blog entries written by ex DCI Jim Heath, an embittered man who lost his job because he was unable to explain or prevent the horrors described here, each story gives us much more detail and explanation than Heath was ever able to find. His conclusions and complaints, contrasted with the reality of the horrors described here, therefore have a slightly (if darkly) humorous effect.
It's a nice contrast, slightly relieving the awful things that happen to so many of the resident of Silverweed Road. Most of the stories (each named after a house number) are self-contained, though we see protagonists cross paths (and sometimes swords) before and after their own story so that through the book a clearer and clearer picture emerges of what is going on. However the exact reasons for it all, while hinted at in recurring motifs - such as the jackdaw - are teasingly vague until the last story, where there is an explanation of sorts.
The stories are varied in atmosphere and style, raging from the folk-horrific to outright gore-fests to creepy encounters with the supernatural force that inspires all that goes on here. The extent to which that supernatural visibly intrudes varies a lot, with a clear sense in some stories that the victim brings their fate on themselves (for example, Victor Hagman at no 31) while in others the innocent are ensnared (Shanta at no 10). Not all of the activity takes place on Silverweed Road - one protagonist here is the victim of a supernatural horror from far off, another meets a grisly fate far from Kent but it seems that the street then takes part in their revenge. Horror mixes with domestic strife and business or personal rivalries, the grim events in Silverweed Road sometimes reflecting wider themes of abuse and at others, taking a very particular local form.
There is humour, aside from Heath's increasingly exasperated (and mistaken) commentary, for example in one story where a darts enthusiast makes an unwise bargain to win a big tournament leading ultimately to tragedy (and one of Heath's most perplexing cases) but creating some hilarious moments on the way. Crook reaches into many different worlds for his stories, including a dodgy antiques dealer, a furious film craftsman upset that CGI has replaced his replica monsters and - perhaps most creepy of all - a scientist who chooses the Road as the ideal site for his sinister research into cuttlefish.
If you do visit Silver weed Road, be aware that there are traps here, ancient and malign forces preying on the unwary. There are ancient secrets in the woods about, and the night is not friendly. You won't come here and leave without being altered, compromised, changed.
Still interested in that affordably priced semi...?
Overall, an excellent collection of interlinked stories, which is really much more than the sum of its parts.
For more information on the book, see the publisher's website here.
Email ThisBlogThis!Share to TwitterShare to FacebookShare to Pinterest
Labels: 2022, crime, horror, Kent, Novella, supernatural