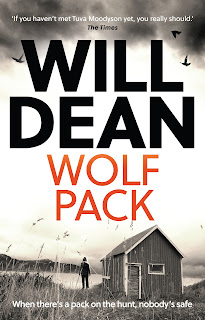 Wolf Pack (Tuva Moodyson, 5)
Will Dean
Point Blank (Oneworld), 6 October 2022
Available as: HB, 302pp, e
ISBN(HB): 9780861541997
I'm grateful to Point Blank for sending me a copy of Wolf Pack to consider for review, and to Anne Cater for inviting me to join the book's blogtour.
What to say about Wolf Pack? I need to be careful, but first I will get one think off my chest: TUVA MOODYSON IS BACK! YES!
That done - why do I need to be careful?
Well, long term readers of these books will know that the previous one, Bad Apples, ended on a real cliffhanger. I won't say what that was because those who haven't read the books shouldn't have that spoiled. Nor will I share the outcome. I will though be having a word with you afterwards about why you haven't read Dark Pines, Red Snow, Black River and Bad Apples yet?
I can sum up the reason you should in three words. Tuva. Tuva. Tuva. For newcomers, Tuva is a borderline alcoholic young woman with family problems. Not fitting in is her thing -  she is Deaf and a lesbian in a resolutely conservative, hardscrabble town out in the forest wilds, a place she has previously called Toytown and here, Shitsville. Daily life brings her up against the town mentality, and as a reporter on the local paper, she's already a figure of suspicion, but her outsider-dom does give her a distinct - not judgemental - perspective on events.
Fortunately, Tuva isn't completely without friends and support when things turn upside down. In many ways, she in on a more even keel here than we have seen before. But still, you get the sense that she's hanging on by a fingernail. How much more must she take?
A lot, as it turns out. In these books Dean has delighted in showing us the stranger inhabitants of the forest. The weird sisters who make model trolls with human hair and fingernails. The entire neighbouring town of Visberg, with its sulphurous apple festival and licensed bad behaviour. The hunters who, one suspects, are more than ready to settle scores out in the woods. And a variety of killers.
In Wolf Pack, we're introduced to a colony of survivalists who live on their own compound behind barbed wire and deep ditches. Now, a young woman has gone missing from their site and there are concerns for her welfare. Can the residents of Rose Farm, where she worked, cast any light on events? Unable to crack the place, the police approach Tuva to see if she can gain access. This brings her into contact with a paranoid and closed community, intensely suspicious of the outside world - and armed to the teeth. To gain their trust, she takes part in a gruelling initiation - but will it be enough?
Wolf Pack is a wonderful addition to the Tuva series. We see the redoubtable reporter at a truly low ebb, but also determined to hold herself together and prevent - or avenge - the destruction of another young life. The rural Sweden that Dean portrays is a harsh place, with Nature tricksy and dangers abounding. Yes, that does - to a degree - push people to cooperate and help each other (as Tammy helps Tuva manage the amount she drinks) but even this can - as with the Rose Farm gang - itself become corrupted.
Tuva's obsession with finding young Elsa seems to know no limits. It's easy to see this as coming from a sense of guilt at what has happened, or a desire strike a blow against the silence, clannishness and localism of the forest people (especially those in Rose Farm) but she also, I think, has a genuine sense of justice. It is a thing that may lead her into danger - does lead her into danger - and that also may have compromised her for the future, leaving favours owed to dangerous people...
For more information about Wolf Pack, see the publisher's website here - and of course the other stops on the blogtour which are listed on the poster below.
You can buy Wolf Pack from your local high street bookshop or online from Bookshop UK, Hive Books, Blackwell's, Foyle's, WH Smith, Waterstones or Amazon. 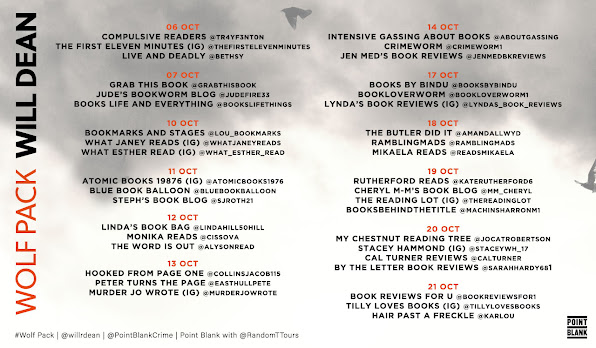