Today I'm VERY excited to be able to share some brilliant news about a new book coming next year  (and to reveal the cover, but just hang on a moment first...)

Releasing in March 2023, Infinity Gate is a major new science fiction novel from M. R. Carey, author of the million-copy bestseller The Girl With All the Gifts. It’s the first book in a duology called the Pandominion, with the second book due to release in Spring 2024.

Infinity Gate is a thrilling tale set in the multiverse - the story of humanity's expansion across millions of dimensions, and the AI technology that might see it all come to an end . . .

The Pandominion is a political and trading alliance of a million worlds - except that they're really just the one world, Earth, in many different realities. And when an AI threat arises that could destroy everything the Pandominion has built, they'll eradicate it by whatever means necessary, no matter the cost to human life.

Scientist Hadiz Tambuwal is looking for a solution to her own Earth's environmental collapse when she stumbles across the secret of inter-dimensional travel. It could save everyone on her dying planet, but now she's walked into the middle of a war on a scale she never dreamed of.

M. R. Carey said about the new novel: “I've always been into genre fusion. The Girl With All the Gifts was sci-fi horror, the Koli books post-apocalyptic sci-fi with a big splash of fantasy and so on. Infinity Gate is pure SF, and that switch of gears has been really energising for me. The core idea is that with the stars forever out of reach (because relativity) humanity goes sideways into other dimensions. There's an empire of a hundred thousand planets, but they're all Earth - the Earths of parallel universes where evolution took different turns. And when a scientist from our world stumbles across the edge of this empire, she triggers a whole chain of events that could save or doom every world there is. All that plus cyborg soldiers, a robot hive-mind and a sentient rabbit girl on the run from the empire's deadliest agents. It's a ton of fun.”
Orbit UK Publisher Anna Jackson said: “I already knew that Mike Carey was an unbelievably talented, versatile writer with a passionate fanbase, but this new duology really blew me away! It’s full to the brim with brilliant ideas and buzzing energy, with characters who grab hold of you and refuse to let go. It’s a total thrill-ride through the multiverse on an epic scale, and readers of space opera and high-concept SF are going to be hooked. We’re excited to reveal the cover today, from our very talented designer Nico Taylor. I love how it gets across this concept of alternate versions of Earth, and how it feels as epic and exciting as the book itself!’
And now for that cover! 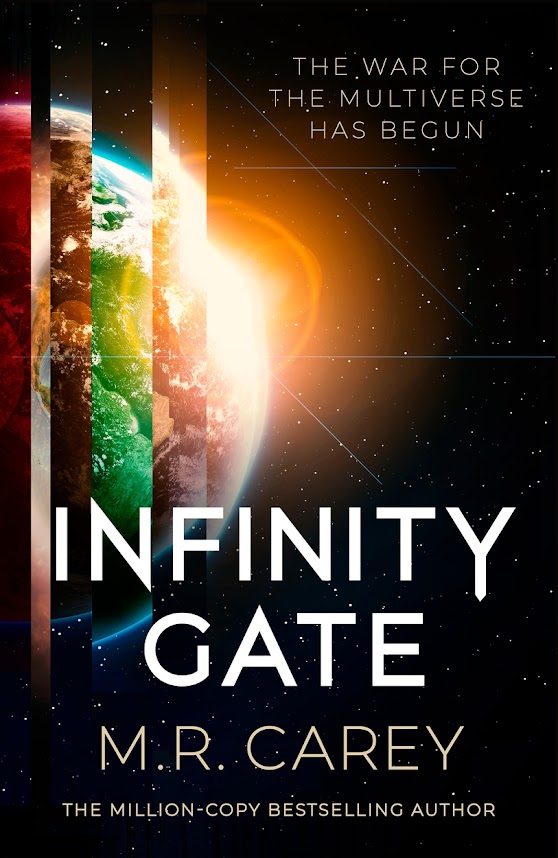