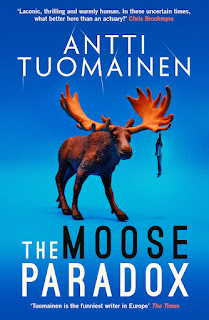 The Moose Paradox (Rabbit Factor Trilogy, 2)
Anti Tuomainen (trans David Hackston)
Orenda Books, 27 October 2022
Available as: PB, HB 261pp, audio, e
Source: Advance copy
ISBN(HB): 9781914585340
I'm grateful to Karen at Orenda Books for sending me a copy of The Moose Paradox to consider for review, and to Anne for inviting me to join the book's blogtour.
Pity poor Henri Koskinen. In the sequel to The Rabbit Factor, he has inherited YouMeFun, the adventure park founded (and laden with debts) by his deceased brother, Juhani. After much hard work by Henri, YouMeFun's finances are turning round and he thinks he may be able to take a breather and think of the future - until calamity strikes in the form of an attempt on his life.
As events unspool, it seems as though, even from the grave, Juhani is able to create complications for Henri, and financial acumen won't be enough to solve them. With attempted extortion, commercial sharp practice, a striking workforce and suspicious police on the prowl, how will Henri ever be able to do that forward planning - still less find a bit of quality time to spend with Laura Helanto, the former YouMeFun manager with whom he's thoroughly besotted?
I absolutely loved The Moose Paradox. (The name refers to a top-of-the-range new bit of equipment which Henri wants to secure to keep the park at the forefront of the Helsinki leisure scene). Henri is a very atypical protagonist - not a man of action, but a man of numbers, of figures and calculations. He's perhaps a bit odd, but Tuomainen makes him much more than a 2D eccentric, an outsider or a wimp. Henri watches, gathers information and makes plans. He acts. His realationship with Laura Helanto isn't hopeless, unrequited love, it's a mutual thing which (with its frustrations and misunderstandings) blossoms through the book and is portrayed movingly.
Laura is also clearly drawn and I really enjoyed the scene when Henri, expressing himself in the best way he can, sets out his feelings for her in terms of percentages and she, rather than laughing at this, picks up the same language - producing one of the most bizarre yet touching conversations I've read in recent fiction.
Aside from all the business dealings, there is also something very odd and sinister going, setting up a mystery that Henri will have to solve if he is to keep the park afloat, indeed, if he s to survive. But with the police taking an interest he may not have much time or freedom of action. The darkly humorous crime plot here keeps the story humming along nicely, in an atmosphere reminiscent of one of the more madcap Ealing comedies - think Kind Hearts and Coronets crossed with Scandi noir, perhaps.
There is a fine cast of supporting characters - the employees of the park, its unlikely new manager and the sinister owners of Toy of Finland, the company from which Henri wants to source the moose ride and who are behaving very oddly in the negotiations.  But really, it's Henri who steals the show. Clearly he's been the slighted, ignored brother, and in a sense taking over the park gave him his chance too shine, to come out from behind the ledgers and spreadsheets. Now it's all threatened, he has choices to make and we see quite a different side of him.
Recommended, whether you're already a Tuomainen/ Rabbit Factor fan or not. The Moose Paradox is perfectly readable as a standalone but obviously does gain if you've read the previous book. The translation by David Hackston is dryly humorous where it needs to and always lucid, serving this story very well and taking in its stride some little points of language that must have been very tricky to render.
For more information about The Moose Paradox, see the publisher's website here - and of course the other stops on the blogtour which you can see listed on the poster below.
You can buy The Moose Paradox from your local high street bookshop or online from Bookshop UK, Hive Books, Blackwell's, Foyle's, WH Smith, Waterstones or Amazon. 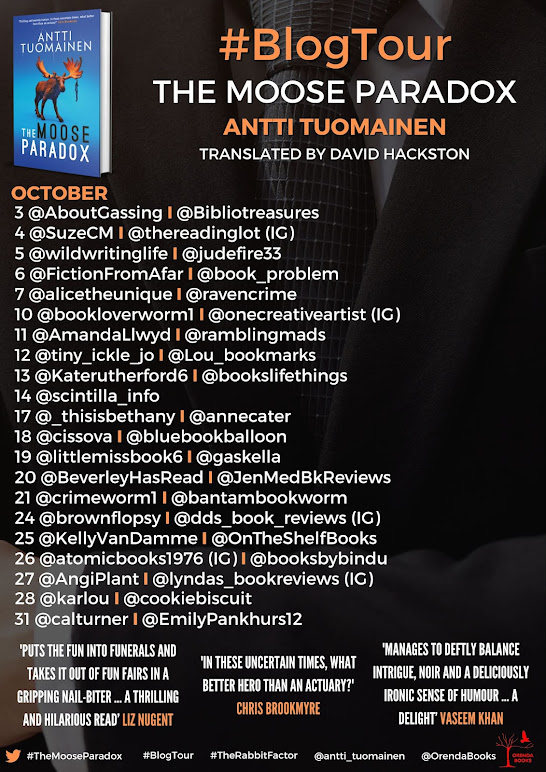