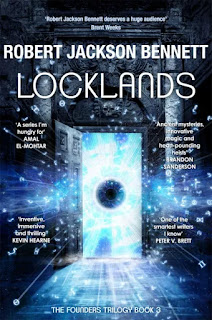 Locklands (The Founders, 3)
Robert Jackson Bennett
Jo Fletcher Books, 28 June 2022
Available as: PB, 546pp, e, audio
Source: Advance PB copy
ISBN(PB): 9781529414073
I'm grateful to Ella at Jo Fletcher Books for an advance copy of Locklands to consider for review, and for inviting me to celebrate the book's publication today by joining the Blog Blast.
It was great to return to the world of Foundryside and Shorefall, a fantasy universe like no other in which the very essentials of creation can be manipulated by a form of notation - 'striving' - which employed written commands and arguments to argue physical things into desired behaviours.
In previous books, we've followed the career of thief Sancia through the squalor of Foundryside in the city of Tevanne, dominated by the major striving houses, and (in Shorefall) seen her join a feisty young start-up determined to break that oligopoly. But these books are not just a disguised critique of tech culture (though that is here) and Shorefall ended with a momentous shift in power in Tevanne, as a monstrous contract emerged, a composite being with control over countless zombie 'hosts'. This new 'Tevanne' has now hunted Sancia, her wife, Berenice, and their other supporters and associates for eight years, waging war on humanity to obtain utter control of the world.
As Locklands opens, Sancia and her crew are launching a desperate mission to rescue a group of refugees from being swallowed up by Tevanne. There's the same sort of a 'caper' atmosphere to this section as in the earlier books, though the stakes are clearly incalculably higher - it's not just about stealing a little bread or business from one of the merchant houses, lives and freedom are at stake ('Move carefully and bring freedom' is a motto much repeated here - we saw in Shortfall how the Houses ascendancy is based on systemic slavery, with people, not just things, being strived: that's the basis of the Tevanne construct's heinous power and its dangerous desires).
So. A caper. But neither Sancia now Berenice is as young as they once were, and eight years of hiding and fighting has demanded a price. The writing in Locklands is never anything other than vital, engaging and fresh, but it evokes heroes who are older. Tireder. Who suffer aches and pains. Who begin to wonder, how long can I go on? I loved that note of realism. It's not just a matter of physical decay, everyone here - even immortal constructs such as Clef, the mysterious scribed key - seems to be coming to a realisation that the end is approaching, that there is so little time left.
Sancia & Co have been struggling against an enemy encumbered by a war on two fronts - it's only, they realise now, the fact that Tevanne has also been fighting the mighty hierophant Crasedes Magnus that has saved them from being overwhelmed. However, Magnus has now fallen and seems set to become. pawn of Tevanne, yielding vital information for the latter's plans.
Another caper then. A raid, an attack, a desperate gambit to deny Tevanne its advantage. The odds are enormous, hope seems faint and everyone is old and stiff. In short - the conditions for cracking adventure, new discoveries and a whole new sort of warfare.
This third and final volume of the Founders trilogy shows Robert Jackson Bennet at his peak, writing vivid, powerful language that does much, much more than register the epic battles and world-cracking conflicts that go on here. There is a vulnerability, a weakness, to everyone here (even Tevanne and even Crasedes) and a dark past to be explored to understand what made them what they are. Locklands has no true villains: in a sense everybody here has good intentions, the author showing how lack of empathy and understanding rather than bad intentions per se (that lack leading to the Original Sin of 'treating people as things') are the faults here.
The problem is, it's all unfolded over millennia, based on some very human, very understandable mistakes and faults. Some very personal, focussed mistakes and faults, never intended to break worlds or enslave millions. Yet here we are, and what's to be done?
This is simply superb, glorious fantasy writing, engaging with deep, important themes and giving us real, loving, crying, cross and suffering characters. What happens to some of them - well, you may want to keep tissues handy. The greatest of the three books in this trilogy, easily, which is saying something and if by any chance you have blundered into this review not having read the others, you really must go back and do that. Locklands would probably make sense read on its own, but why you'd want to deny yourself the glory of Foundryside and Shorefall, I really don't know.
For more information about Locklands, see the publisher's website here; be sure to check out the other sites on Blast, listed in the poser below; and most importantly of all, get a copy - you can buy the book from from your local bookshop, or online from Bookshop, from Hive Books, Blackwell's, Foyles, WH Smith, Waterstones or Amazon. 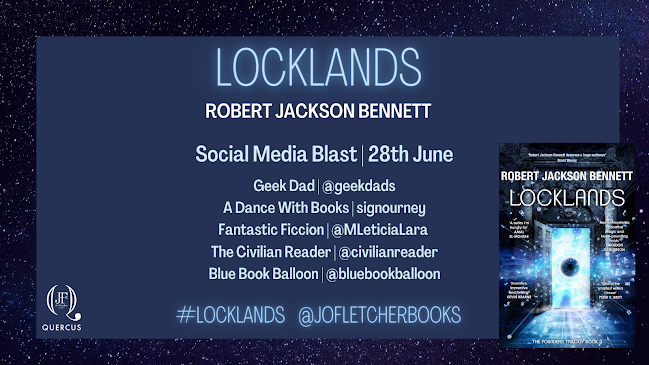