#Review - For the Throne by Hannah Whitten 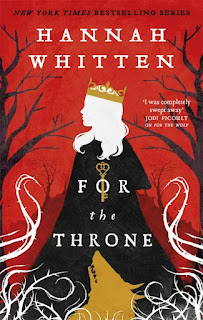 I'm grateful to Orbit for an advance e-copy of For the Throne via NetGalley, to consider for review.

It was always going to be a tough gig for Whitten to follow up last year's mesmerising For the Wolf - but she has written another story of the Wilderwood that is just as captivating, knotty and magical.

Caution: mild spoilers below for For the Wolf - don't go on if you haven't read that book, try my review of it instead. For the Throne really isn't a standalone.

In the earlier book, loosely a take on Red Riding Hood, the focus was on Redarys (Red), the Second Daughter of the Queen, whose fate was to be sent into the Wilderwood, to be given to the Wolf and done with according to his wishes. The First Daughter, Neve, in contrast, was reserved for the Throne. That book told how Red accepted, but subverted, her apparent fate; fell in love with the Wolf (who was also the Wood); came to understand that the garbled folk tales of Valleyda missed out a lot, and saved the Wood - and the World - from the evil forces of the Shadowlands. Neve, who featured less in For the Wolf, was determined to fix things. Tusting the old stories she set out to 'rescue' Red - and thereby caused a heap of trouble, ignoring Red's wishes and pandering to an Ancient Evil (I LOVE an Ancient EVIL!)

Neve ended up enchanted, asleep in a glass coffin in a monochrome Underworld. Thus begins For the Throne, which, if the first book was informed by Red Riding Hood, is clearly riffing off Snow White - Neve has her own dodgy prince with her in the Shadowlands, a realm of rot and decay inhabited by melancholy monsters and dead necromancer kings. Solmir was very much the villain of the previous book, but now he needs something from Neve - and she needs him, because only he can help her escape from the Shadowlands.

The book therefore follows something of the same template as For the Wolf, Neve's relationship with Solmir beginning with the same lack of trust as that between Eammon, the Wolf, and Red in the earlier book. But Whitten doesn't just give us a recap - great though it was, that would have been a disappointment. No, Neve's journey is quite different to Redarys's. We are reminded by the title that Neve was always meant to be a queen, and the way she approaches Solmir - and the other strange and creepy denizens of the Shadowlands - reflects this. Neve's actions in For the Wolf, disastrous as they were, flowed from her wish to be in charge, to control, and from the fact that she had the position to achieve to achieve this.

Now she has no authority, no power, no control. Yet she is the same Neve as before, albeit rather a chastened one, and she soon understands that something about her - what? - is necessary to Solmir, to the Kings, to their Children. Neve is still a Queen, but to survive - to escape the Shadowlands, rejoin Red and prevent a catastrophe - she has to find a different way to be a Queen. Tempted with glimpses of dark magical power - it fairly roils from the creatures and inhabitants of the Shadowlands - the possibility of corruption by way of that power and control lurks at every twist and turn of this fascinating and compulsive story. Neve's story is very internal, very psychological, projected onto her relationship with Solmir, which becomes equally complex. The dialogue between them is perfect, simultaneously negotiating their predicament and a burgeoning relationship, albeit one with Secrets.

We see much less, on the other hand, of Red and her group of friends and allies. From their perspective, Neve is lost and needs to be recovered, but they have little knowledge of how to do this. The repercussions of her vanishing are gradually spreading through Witten's little world of kingdoms and thrones, but they're overshadowed by different rumblings - earthquakes and disturbances, as though the very roots of the universe are failing. Amongst all this, Red does what she can, but is much less active here.

This is a nicely balanced story which, as I have said, is a lot more than a redo of the first book but still retains much the same balance between fairy tale and real, even gritty, atmosphere (and for "gritty", when it comes to some of the scenes between Red and Eammon, read "steamy"). As I have said, it really isn't a standalone. Apart from straightforward spoilers from reading this book first, there is a lovely interplay of development and personality, across the two books, between Red and Neve. Their outlooks and personalities have been shaped by prophecies and their supposed destinies, but there is much more to the two women than those factors - as Whitten triumphantly demonstrates.

Just as good as the first book, For the Throne complements and deepens its consideration of chartist, fate and prophesy, creating something in the duology that is a great deal more than the sum of its parts.

For more information about For the Throne, see the Orbit website here.